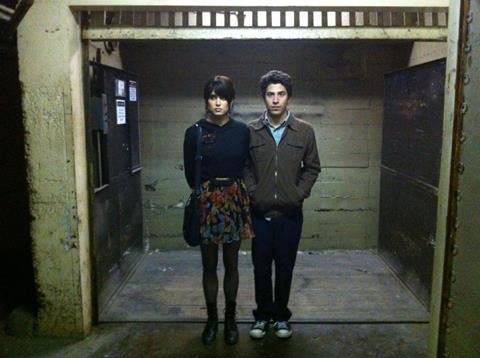 Meek, obviously troubled. Jim Whitman (Jake Hoffman, son of Dustin) does in-office IT tech support and assembles dubstep sample tracks on his home computer.  He seems to live with Jake (Thomas Dekker), maybe his older brother, who harangues him about what a repressed loser he is, especially sexually.

Snap has ambiguities and subtleties.

The post-Fight Club inside-the-mind-of-a-split-personality conventions are now so well established that the penny drops instantly that Jake isn’t really there.  The imaginary friend nags the protagonist like the cartoon devil Tom in the Tom And Jerry cartoons - which raises the question of why these films never bring in an angel Tom to represent the character’s better instincts.

However, Snap – directed by Youssef Delara and Victor Teran, from a script by Teran, which premiered at SXSW and screen’s at London’s FrightFest – has more to it than the simple revelation that Jim is demented.  On a job, he meets Wendy (Nikki Reed), a sympathetic young woman who likes his music, but also recognises his problems because she has a more manageable version of the same set of neuroses.

Jim and Wendy go on a date and Wendy even gets him a club slot to play his tracks; however, when she takes him home and they begin making out, he ejaculates prematurely.  His Jake alter fuels his feelings of inadequacy and paranoia by telling him she’ll spread the word about his sexual dysfunction.

A social worker/shrink (Scott Bakula) delves into the childhood trauma that set Jim on his path, which involves the real Jake and the sexual torture and murder of another boy and a bit of melodrama about a body buried in a back yard.  Jim starts taking Jake’s advice and becomes more assertive, playing his music too loud at home and killing a neighbour’s dog when she complains.

He harasses Wendy with attempts to get back together that only serve to put her off him even though she still understands and empathises, and finally shows up at a dinner party with an air-gun at exactly the wrong time, just after Wendy’s superficial friends have brought him up as an amusing story …

The climax devolves to the usual duct-taped victims summarily executed or struggling to get free, but there is more thought than usual in the way Wendy knows how to calm Jim, but her friends can’t refrain from ranting abuse in a manner which triggers his murderous instincts.

The initial trauma, a variant on the flashback in Spellbound (1948) to show how little psychodramas have advanced, is obvious and trite, but Snap has ambiguities and subtleties – including the chilling exchange between Jim and Jake when Jim responds to jeers about his lack of sex life with ‘I’ve been laid’ and Jake deadpans ‘oh, you’re counting that’, suggesting a history of violent sex acts, and the suggestion that Jim has used the screams of a former victim in his music.

It’s very well acted by Hoffman and Reed (who remains undervalued as she straddles the indiedom of Thirteen and the mainstream of the Twilight films).  Given the subject matter – at one point, Jim shoves a knitting needle in his ear in a vain attempt at shutting Jake up - it’s apt that Delara and Teran work hard on the soundtrack, with an eerie, unsettling mindscape that blends in with Jim’s compositions, integrating Reza Safina’s excellent score with layered sound effects.