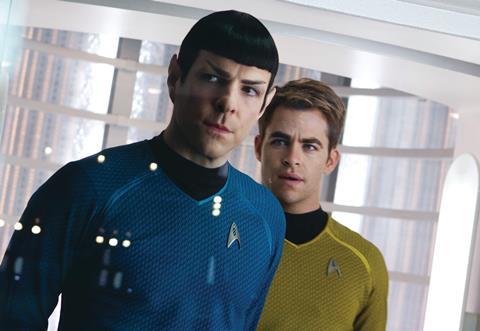 Following on from Iron Man 3’s $21.3m (£13.7m) debut a fortnight ago, Star Trek Into Darkness has delivered another strong opening salvo to top the UK box office.

Star Trek is also Abrams’ strongest UK performer at $32.9m (£21.4m) and while some fellow big hitters arrive this week in the form of Fast & Furious 6 and The Great Gatsby, Star Trek Into Darkness has a good chance to top that performance.

Disney’s 3D superhero outing blasted its way to a further $4.9m (£3.2m) to break the £30m barrier and climb to $47.8m (£31.1m). With around £20m to make up on The Avengers, it’s unlikely that Iron Man 3 can become the UK’s best Marvel performer, but it’s an excellent performance regardless.

This week sees saturation releases for Universal’s Fast & Furious 6 and Warner Bros’ The Great Gatsby [opens May 16]. Metrodome’s The Liability is among the films receiving a limited release.