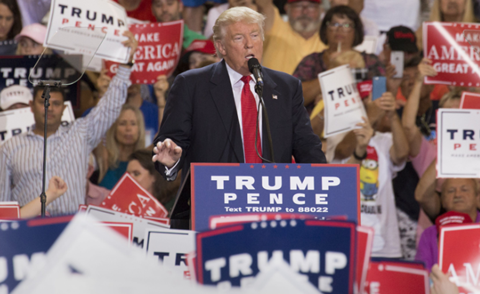 Drake Doremus’s Newness joins the Premieres section and stars Nicholas Hoult and Laia Costa in the story of a relationship between two Los Angeles millennials.

TRUMPED: Inside The Greatest Political Upset Of All Time (pictured: Laura Hudock / courtesy of SHOWTIME) will screen in Documentary Premieres and offers a behind-the-scenes look at president-elect Donald Trump during the election process.

The two additions means the festival will screen 120 features representing 32 countries and 40 first-time filmmakers, including 20 in competition.

Selections were culled from 13,782 submissions including 4,068 features and 8,985 shorts. Of the feature film submissions, 2,005 were from the US and 2,063 were international. One hundred and three features are world premieres.

TRUMPED: Inside The Greatest Political Upset Of All Time (USA)
Dirs: Banks Tarver, Ted Bourne, Mary Robertson
In a behind-the-scenes look at the biggest political upset in recent history, Mark Halperin, John Heilemann and Mark McKinnon offer unprecedented access and never-before-seen footage of candidate Trump, from the primaries through the debates to the dawning realisation that the controversial businessman will become the 45th president of the United States.
World Premiere