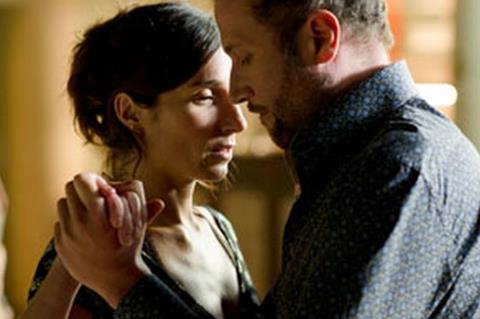 Frederic Fonteyne’s new film starts with an interesting premise…not two but three men in love with one woman. Told mostly with a straight face and quite a few melodramatic turns of the screw, it has some droll moments as well as a number of memorable show stoppers, such as a whole bunch of big, burly, grim looking male prisoners, dancing the tango with each other, inside the prison walls, but what’s lacking in it is a solid spine to hold all of it together.

It would be tempting to look at the film as an unrealistic metaphor dealing with spiritual freedom that no prison can tame, but Fonteyne’s approach is too heavy-handedly realistic to permit such fancy.

Trying to be light and heavy at the same time is the kind of challenge that needs a touch of genius, which is sadly missed here. The halting plot gets stuck into one cul-de-sac after another, the cast can’t quite make up its mind in what register they are supposed to play and the quasi-fantasy ending will leave audiences wondering at the unexpected twist they are dealt. The film screened in the Orrizonti section at the Venice Film Festival.

J.C. (Francois Damiens) is a prison guard, a dull, solitary man sharing his existence with a geriatric gold fish, and whose only relief is going once a week to a tango class. There he meets a winsome nurse Alice (Anne Paulicevich, the screenplay’s author), only to discover next day that she is visiting two separate inmates sharing the same prison cell, Fernando (Sergi Lopez), an expansive, hot blooded Catalan and Dominic (Jan Hammenecker), Flemish, heavy set and introvert.

Guards are not supposed to socialise with inmates’ families, but J.C.’s curiosity is aroused by this strange relationship, so terribly alien to his own existence. In his own sluggish way he is also beginning to have feelings for the woman and look for her company, though the presence of her rebellious teenage son, Antony (Zacharie Chasseriaud) complicates a possible relationship.

Told that Alice has danced with a guard, Fernando asks a tough Argentine prisoner to teach him the tango as well, and once he gains the man’s respect by attacking J.C. in front of the entire prison, he not only gets taught how to dance but every other inmate in sight joins in, with the guards looking in amazement at the spectacle.

The spark that sets the plot moving again is lit by Antony, who suspects his mother of chumming up with the guard and throws several tantrums to express his protest. A number of detours finally lead the plot to an unlikely conclusion, which may suggest the beginning of an eventual sequel.

The tango, of course, holds a key position in all this, for, as the Argentine inmate explains, this is not just a dance but practically a religion, the most wondrous, liberating, stimulating and marvelous one around, once you let yourself go with it. Naturally, J.C., a constipated character by definition, cannot do it until he closes his eyes, with Alice in his arms to inspire him.

At which point, he seems willing to gradually take leave of his own self and embark on a new and different kind of life. It would be tempting, because of this turn of events, to look at the film as an unrealistic metaphor dealing with spiritual freedom that no prison can tame, but Fonteyne’s approach is too heavy-handedly realistic to permit such fancy.

Jan Hammenecker’s sturdy, reliable Dominic stands out in the cast, no doubt since his is a straightforward role, but his relationship with the more ebullient Lopez, who did so well in Fonteyne’s earlier sex fantasy Liaisons pornographiques, and Paulicevich, sexy, alluring but less stunning than her part would expect her to be, is never really resolved.  As for Damiens, his being so excessively faithful to J.C.’s limp, passive character makes him much less interesting than he should be.