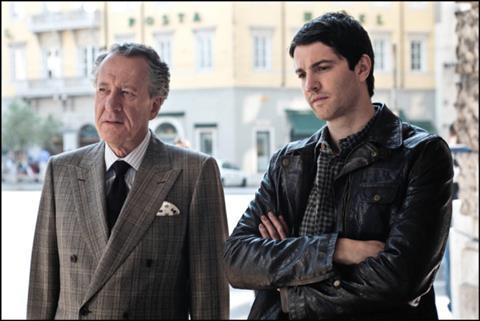 A storyline that never quite delivers and some clunky dialogue derail the initial promise of Cinema Paradiso director Giuseppe Tornatore’s first English-language feature, a quirky art-world drama set in some unnamed Mitteleuropean city. Geoffrey Rush gives his all as a dried-up old crotchet of an auctioneer leant a new lease of life when he falls in love with a mysterious young beauty, but his performance alone cannot rescue a film that invests too much in its over-obvious last-act plot twist.

There’s an enjoyable disjunct between the film’s ‘somewhere in Habsburg Italy’ setting and the British-English-speaking characters who live there; and the occasional tasty nod and wink to golden-age Italo horror and thriller fare.

Tornatore’s script was presumably written in Italian and translated into English. It certainly sounds that way, and the stilted dialogue will play against the film’s international prospects – as will the contrast between the solid lead performances, especially by Rush and Jim Sturgess, and some less than convincing bit parts. In Italy, where the dubbed version of The Best Offer was rolled out on 373 screens by Warner, the film posted healthy opening weekend results, seeing off both Jack Reacher and The Master. The critics too were mostly upbeat. Perhaps international distributors should consider releasing the dubbed Italian version with English subtitles, as it clearly plays better than the original.

Rush’s character, Virgil Oldman, is the cranky, pompous old boss of a leading auction house. He dyes his hair and always wears gloves – chosen from a vast selection in his opulently sterile apartment – when conducting valuations or auctions; as the gloves suggest, his imperious treatment of both employees and clients hides a deep loneliness and fear of exposing himself emotionally.

Virgil is also an experienced and canny art and antiques expert, able to spot a fake or an overlooked masterpiece at several paces, and has used his ability to assemble a room of priceless female portraits – which are hung in a high-security room behind his sliding glove display case. The portraits have mostly been bought for a song with the connivance of old art-world acquaintance Billy (Donald Sutherland, taking it easy), who bids on deliberately undervalued works at Virgil’s auctions when the latter gives him the nod – works which are being sold on a  ‘best offer’ basis.

Called in to value the contents of a big old house in the city he operates in (a city which is never named, though it mashes up elements of Fidenza, Milan and Bolzano, where most of the film was shot), Virgil is first irritated and then intrigued by the repeated failure to show off his clearly fragile client, Claire Ibbotson (Dutch actress Sylvia Hoeks, rather too intense), who finally admits to a bad case of agoraphobia. Virgil is also drawn to Claire’s draughty mansion by certain bits of antique machinery he picks up on each visit.

He takes these to Robert (Sturgess), a young neo-Cockney ladies’ man who runs a sort of Old Curiosity repair shop in the town centre. Robert starts to piece together what soon turns out to be a rare and valuable automaton – an eighteenth-century robot – while also advising the lovestruck but woefully inexperienced Virgil on how he should go about courting Claire.

This is a film whose themes must have looked more interesting on the page than they turn out to be on the screen. Can emotions be faked just like artworks? Can beautiful things act as substitutes for emotions? Can the clocks be turned back by love? Such questions are left hanging as the script plods through Virgil’s long, slow unravelling, which lacks much in the way of side-lighting. None of the other characters hold much interest for us – including Claire, who becomes less believable the more visible she becomes, especially in some steamy flashback sex scenes.

A few small pleasures remain besides Rush’s star turn. There’s an enjoyable disjunct between the film’s ‘somewhere in Habsburg Italy’ setting and the British-English-speaking characters who live there; and the occasional tasty nod and wink to golden-age Italo horror and thriller fare, especially in Ennio Morricone’s arch, partly choral soundtrack. But these are small mercies; we’re left wishing that Tornatore had made us a better offer.