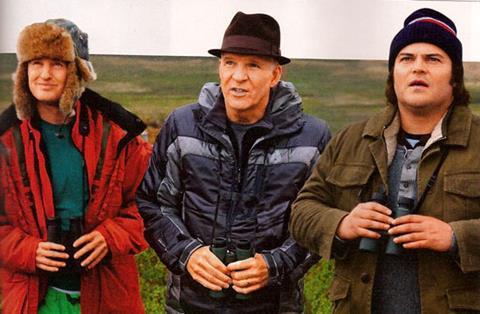 Steve Martin, Jack Black and Owen Wilson team up to middling effect in The Big Year, a pleasant if not particularly funny comedy, directed by Marley & Me’s David Frankel, about three avid birdwatchers and their family-related personal issues.

The lead performances feel a bit restrained as the stars struggle to find a balance between comic exaggeration and dramatic realism.

The stars’ recent track records – Martin has been off the screen for a while but Black and Wilson are reliable draws – suggest a fair to middling take when the Fox release opens in the US on Oct 14. The success outside the US of Black’s Gulliver’s Travels may help the film over the course of an international rollout that extends into next spring.

Inspired by a non-fiction book about real-life birders (as they apparently prefer to be known), the script by Howard Franklin (Quick Change) follows Martin’s wealthy industrialist Stu, Black’s sad sack computer programmer Brad and Wilson’s cocky building contractor Kenny during their ‘Big Year’ – a contest that has participants flitting around North America trying to spot the most species in a twelve month period.

The emotional core of the story, however, is provided by the backdrop to the contest: Stu’s struggle to retire into grand parenthood; Brad’s yearning for his father’s respect and a girlfriend; and Kenny’s questionable commitment to a new wife with pregnancy plans.

Frankel guides the film smoothly through its transition from comedy to drama and delivers the same kind of emotional warmth that he brought to Marley & Me. Mostly missing, though, is the sharp comedy of the director’s earlier hit The Devil Wears Prada.

The actual birding doesn’t provide many opportunities for humour – certainly not as many as a marauding dog or a boss from hell – though it does give the film an excuse to show some beautiful scenery.

The lead performances feel a bit restrained as the stars struggle to find a balance between comic exaggeration and dramatic realism. Enjoyable supporting performances come from Dianne Wiest, Brian Dennehy and Anjelica Huston.