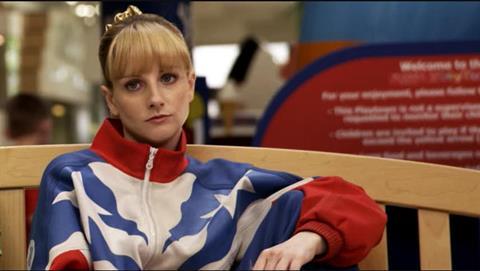 Catering to the same audience that adores Bad Santa and Bad Teacher, The Bronze features a toxic former Olympic gymnast who’s due for an attitude adjustment. Not without its bluntly funny bits, this nasty, programmatic comedy wants to be outlandish but, oddly enough, it’s the movie’s lack of realism that really hurts it.

Most known for her work on the sitcom The Big Bang Theory, Rauch invests fully in Hope’s unremitting bitterness.

Hope Ann Greggory (co-writer Melissa Rauch) is a hero in her small Ohio town: Back in 2004, the gymnast competed in the Summer Olympics, bravely toughing out a severe ankle injury to rally and win a bronze medal. The story of her gritty resolve made her an American icon for a while, but with the 2016 Olympics coming up, she’s become a footnote, a has-been. Nonetheless, Hope still clings to her former glory, even wearing her old Olympic training gear on a daily basis.

Abusive to her patient father (Gary Cole) and a narcissist who demands to be worshipped by everyone, she learns that her old coach has committed suicide, leaving $500,000 in her will to Hope if she trains her new protégé, a talented gymnast from Hope’s hometown named Maggie Townsend (Haley Lu Richardson). With her endorsement deals long gone — and too proud to get a regular job — Hope sees she has little choice but to mentor Maggie, which forces her to confront an old rival (and former lover) Lance Tucker (Sebastian Stan), who is also coaching aspiring Olympic gymnasts.

Mocking the conventions of the sports movie, The Bronze also sticks it to the faux-nobility of the Olympic Games. First-time feature filmmaker Bryan Buckley and screenwriters Melissa Rauch and Winston Rauch channel their invective through the poisonously spiteful Hope. Though she’d been marketed as America’s Sweetheart, Hope is a coarse, sheltered egomaniac, an obnoxious brat who consciously chose to remain in an adolescent state rather than move on from her brief moment of athletic triumph.

That’s a funny conceit — an acknowledgement of the vanity and ugliness underlying the supposed grandeur of sports competition — but The Bronze doesn’t really develop the idea so much as run it into the ground. In the tradition of the human monsters on display in Bad Teacher and Bad Santa, Hope is not a character: She’s merely a vehicle for unleashing a string of cruel, often offensive putdowns at all the kinder souls around her. Some jokes land, but the repetition of the setup gets old fast — both because Hope isn’t a very nuanced misanthrope and because we know this routine from earlier, similar films.

To be sure, Hope is supposed to be an extreme character, but as played by Rauch, she always feels like a construction — an idea of a truly rotten person, a caricature of fleeting sports celebrity. But the permed hair and permanently bitchy scowl are mannerisms without insight. And her arrested development — she sleeps with stuffed animals and prefers watching her old Olympic broadcasts on VHS — never becomes particularly funny. Because the character seems so detached from reality, nothing in The Bronze carries much weight — not even the sting of her cruel remarks.

Ordinarily in these kinds of films, the corrosive protagonist is meant to be a bracing tonic to the overly kind-hearted, saccharine fools around her. But neither Maggie, who grew up worshiping Hope, or Ben Lawfort (Thomas Middleditch), a fellow gymnastics trainer with an unfortunate habit of facial twitching, are rubes deserving of Hope’s insults. The filmmakers focus so much on the meanness that they don’t bother setting up much of a dynamic between Hope and those around her: She’s a shrill jerk, and they’re unmemorable punching bags.

Most known for her work on the sitcom The Big Bang Theory, Rauch invests fully in Hope’s unremitting bitterness. Predictably, Hope will eventually soften, finding love in an unexpected place and taking a shine to Maggie — even though the young woman’s Olympic success would mean that Hope would have to share the hometown spotlight with her. Rauch slowly excavates her character’s buried humanity, but the change of heart isn’t rewarding. As for the much-discussed sex scene near the end of The Bronze, it’s emblematic of the film as a whole: It’s mildly clever, sorta funny, but not quite as liberatingly shocking as the filmmakers seem to think.