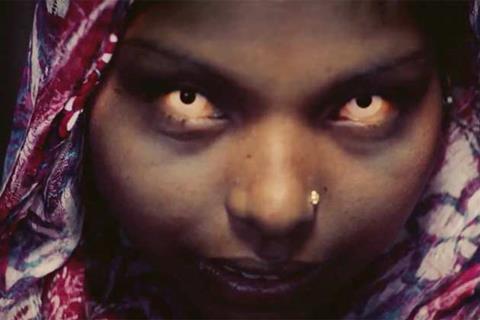 British director-producer-writer brothers Howard and Jonathan Ford made their debut with The Dead, a 2010 zombie movie which wed a familiar George Romero-style premise to an unusual location and set its outbreak amid war-torn African landscapes.  For their follow-up, the Fords have moved on to the Indian sub-continent and had the infection spread by the bite of a Somali emigrant to whip up the usual monster chaos in another fresh location.

There have been a few Bollywood living dead-type horror films – most of which have to involve colonial graveyards since Hindus cremate their dead – but this doesn’t take any cues from local specifics.

While the zombie plague rages through the crowds of Mumbai and the arid countryside, hero Nicholas Burton (Joseph Milson) struggles to make his way from the wind farm where he was working as an electrical engineer to the city where his pregnant girlfriend Shani (Meenu) is having a conventional argument with a father (Sandip Datta Gupta) who wants her to enter into an arranged marriage while her mother (Poonam Mathur) is suffering from a zombie bite and the early stages of transformation.

Making his way through zombie-stalked countryside by para-glider, car, motorbike and on foot, Nick partners with plucky orphan Javed (Anand Gopal), who helps the foreigner negotiate some of the trickier byways.

There have been a few Bollywood living dead-type horror films – most of which have to involve colonial graveyards since Hindus cremate their dead – but this doesn’t take any cues from local specifics.

Aside from some talk of Kali and fate, this script could as easily have been set in France or Ecuador or wherever filming permits were available and there’s only the shallowest sense of the difference between a plague in the wide open empty deserts of Africa and the teeming slums of Mumbai.

All the relationship elements (foreign hero and local kid sidekick, father distrustful of the outsider’s marital intentions) are from stock, and aside from British thesp Milson (playing American) the cast is rather awkward.

The Dead 2: India was the opening night film of this year’s London FrightFest event. Like The Dead, however, it does offer spectacular landscapes and tolerable zombie horror – but at this stage of the worldwide zombie movie craze, it really needs more to stand out in the crowded marketplace.