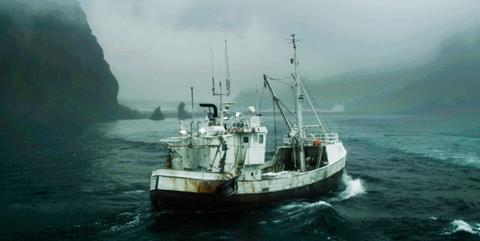 At the end of Kormakur’s masterful blend of sound and fury, the real-life fisherman on whose inexplicable feat in 1984 of surviving six hours in frigid waters after the boat on which he and five companions worked in the legendarily rough waters of the North Atlantic, tells national television, “No one is really bothered by this thing happening.” Thing? In typical Icelandic fashion, he downplays his unique personal experience; like his character in the film, Gulli (Olafsson), he is much more at home talking about the fate of his mates. The worldview is collective.

The film’s gorgeous, nearly monochromatic visuals, haunting sounds of nature at its cruellest, and rare, appealingly anti-heroic storyline should entice a large chunk of viewers.

“Thing” is also a sly reference to the movie’s subtext: the country’s 2008 heavy economic collapse. Controls in the banking world, which helped maintain a healthy, democratic system of checks and balances, were lifted, and a few lone sharks took full advantage at the expense of everyone else. Whether no one is bothered is arguable, but the damage is as enduring as Gulli when he beats what should have been insurmountable odds at sea.

Although rooted in tragedy, the film’s gorgeous, nearly monochromatic visuals, haunting sounds of nature at its cruellest, and rare, appealingly anti-heroic storyline should entice a large chunk of viewers, especially after reviews come out. The tremendous response at the Toronto world premiere of The Deep (Djupid) made it clear that this will be successful with the general public as well as aesthetes who have appreciated the tremendous talent Kormakur has displayed in seven earlier features.

Scenes of the shoddy boat’s sinking and the men’s attempts to survive provide jolting action, but not too much to overwhelm the calmer, character-driven tale of Gulli’s inner battle to retain consciousness and lucidity throughout this unusual journey, an occasional prayer, conversation with gulls overhead, or repetition of jokes he has told in his local bar the only verbiage.

These sequences provide the filmmaker an opportunity to manipulate old and new film stock to deconstruct memories, especially of Gulli’s childhood at the time of the destructive 1973 eruption of the Eldfell volcano, in a superb, nonlinear style that abuts the straightforward plotline in a painfully beautiful manner. Recurring shots of his companions’ bodies floating are not exploitative but in fact own up to the reality of the situation, honouring the deceased with the spirit of truth.

Gulli, a chain-smoking single man of 24, lives in the remote Westman islands off the southern coast of Iceland. Like most men in these small communities, he is a heavy drinker and an unflashy nice guy, most at home with his male pals and family. Fishing is the mainstay of the islands’ tiny population, fewer than 5000 persons, most of whom subscribe to a spartan Lutheranism and the non-embellishment it implies. He is overweight, not particularly attractive, and, most surprising of all, in appalling physical shape. The best scientists could do to calibrate his survival was to compare his fat layers to those of a seal.

Not to give anything away but the film ends on an optimistic note, which translates in Icelandic culture to a return to sameness, to the appeal of directness. At this point we understand that Kormakur truly believes that rugged Iceland can and will overcome crises of any scale.