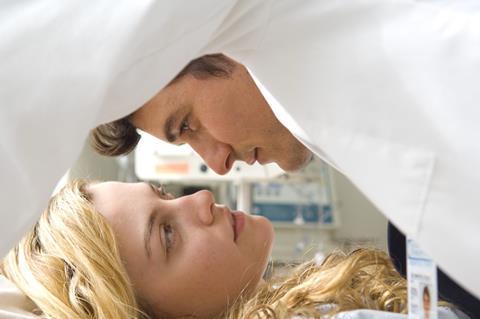 This is a rarity: an American indie that is deftly directed, intelligently scripted, and superbly, and understatedly, acted. Okay, Lance Daly (Kisses) is Irish; Orlando Bloom, English; but it’s a stateside production, and why quibble over something so balanced? Lynch’s score neither over signals nor overwhelms. Daly was guided by Enbom’s tight script, relatively placid given that most of it takes place in a chaotic, understaffed hospital in some unspecified American coastal city. Against the odds, Bloom and Riley Keough’s withheld energy works well in such an environment, defying the more typical scenery chewing one finds in both indie and studio films set against inert backdrops.

The film possesses that increasingly rare unity that makes it appropriate to apply one of criticism’s most overused (and underexplained) words: organic.

Commercially, the film’s problem might well be the calm of its leads. Bloom’s British character is in turmoil, but it’s very much interior, more UK than US, so that when he breaks into a run on the beach  in a late fantasy sequence (which would serve the film better if it were excised), it’s as if a meteor had struck the sand. Several twenty- and thirtysomethings at the film’s Tribeca world premiere denigrated it for its lack of action.

What many of us see as near-perfect simplicity is to some among potential young audiences just ennui. This indicates more about contemporary culture and media than reflecting profoundly on the screenplay and the filmmaking. What this could mean in many territories, American and foreign both, is an uphill battle to promote The Good Doctor, as much an educational campaign as a marketing challenge.

After leaving the UK, Martin Blake (Bloom) is beginning his residency in general medicine. That this recent medical student lives alone in a spacious split-level flat on the beach with tastefully irregular windows is just one of several conspicuous incongruities, but again, this is more a question of why-the-hell than a major point of contention. His goal is a fellowship in infectious diseases at the hospital. He is off to a bad start, falling out with a powerful nurse, Theresa (Henson), and inadvertently endangering a non-English speaking allergic patient with penicillin.

Enbom succeeds in a difficult balancing act: The more events point to Martin’s erratic decisions and culpability in more than one death, the more enthusiastic the response of his superiors to his work, and therefore increased odds for the coveted honour. The writer plants other red herrings as well—some might call it Hitchcockian—but the gods seem to look out for the young man (the Monkees coiffure is a bit much, even looks like a toupee), even if he is responsible for two mortalities and is so careless and emotionally troubled that you almost want your protagonist to get caught.

The other main character, Diane (Keough, daughter of Lisa-Marie Presley), a patient with a potentially dangerous urinary tract and kidney disease called pyelonephritis and clearly a minor, shares with Martin two easily noticeable characteristics: abundance of beauty and dearth of charisma.

While that works on a narrative level, their supposed mutual attraction is sometimes hard to swallow. So is the idea that his obsession with her so powerful that he is willing to risk her life by tampering with her medications so that she must return to the hospital, where he even injects unsafe solutions into her IVs. (Like several points in the symmetrical script, his interference with Diane’s health is echoed later on when he spikes the recreational drugs of an orderly, Jimmy (a terrific Pena), who blackmails him with Diane’s implicating diary. The amoral Jimmy, whom a judgmental Martin has caught having sex with a sedated patient, serves as the proletarian Latino double for the privileged white boy.

Save for the climax, which involves a seemingly knowing detective (Simmons, in one of several nods to Law & Order) who is just leading Martin—and us—on and the imaginary bolting to the sea, the film possesses that increasingly rare unity that makes it appropriate to apply one of criticism’s most overused (and underexplained) words: organic.