The Inbetweeners Movie: Anatomy of a UK hit

Screen breaks down the keys to success for the UK’s summer sensation The Inbetweeners Movie, the territory’s most successful independent comedy ever and its third-biggest film of the year. 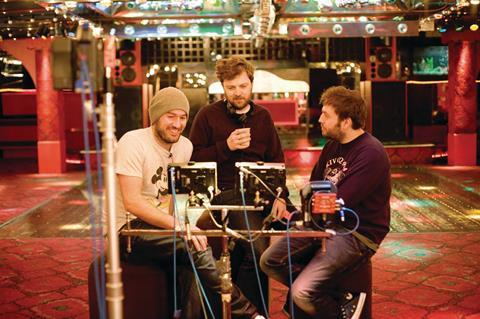 The Inbetweener’s Movie has been nothing short of a box office sensation. The £3.5m-budgeted comedy has grossed £39m in the UK to date, making it more lucrative than studio tentpoles Pirates of The Caribbean: On Stranger Tides, The Hangover Part II and Transformers: Dark Of The Moon and the third-biggest film of the year to date behind Harry Potter And The Deathly Hallows: Part Two and The King’s Speech.

The surprise hit has just completed four consecutive weeks at the head of the local box office, a feat only matched this year by Potter, and it has easily seen off challengers Cowboys And Aliens, Fright Night, One Day and Friends With Benefits during its remarkable run.

“It’s been quite surreal. We knew there was a core audience but it’s the way it has sustained that has been amazing. It has become a cultural phenomenon,” said executive producer Shane Allen.

The Inbetweener’s Movie picks up where the award-winning E4 comedy-sitcom ended last year, following four hapless but hilarious 18-year-olds from the south of England, on a holiday to Malia in the hope of finding girls, cheap beer and sun.

Crucially, the film retained the creative elements that made the series such a hit: writers and producers Iain Morris and Damon Beesley, director Ben Palmer, key producer Christopher Young and lead actors Simon Bird, James Buckley, Blake Harrison and Joe Thomas. “It was about keeping the model of what worked for TV and not breaking that spell,” says Allen, Channel 4 ‘s head of comedy.

But as Allen explains, backing the film to the tune of £3.5m was a considerable risk for principal financiers Channel 4 Comedy: “This is the first film that the TV comedy department had invested in. The spend was above and beyond our usual budget. The average TV sitcom series is around £1.5m so this was a massive leap. I had to put on some swagger when I went to the board. While you are normally trying to undersell in pitching TV with this I had to be extremely confident. It was like a game of poker.”

The impressive arc of the script, which set the film apart from the usual adaptations of popular TV comedy series, was a major factor in convincing Channel 4 to put its chips in. However, ultimately, it was Four Rights’ decision to put up the majority of the film’s budget on the proviso that they retained the film’s DVD rights, a risky move which frustrated many would-be distributors during discussions at Cannes 2010, but which turned out to be a masterstroke.

Despite that downside for distributors, the film was courted by a number of the UK’s top companies. Producer Christopher Young was won over by the enthusiasm shown by Nigel Green of Entertainment Film Distributors: “He was the most positive. He had a scale of ambition. Most of the other distributors saw the DVD sales as the obvious cash cow and they talked in terms of a film that might do up to £5m or £10m, maybe £12m. Nigel never talked figures. He said we could do something really big with this. That matched our own ambition.”

The team set themselves the ambitious task of shooting in February and March 2011 and releasing in the summer: “People will wait one year [the third and final TV series wrapped in summer 2010] for the film but I didn’t think they would want to wait much longer. Anticipation would be high by then. In practical terms it made my life hell, but we had to do it that way,” recalls Young.

The production involved its large, built-in fan-base from an early stage, releasing a teaser trailer on the film’s Facebook site (which has over 3m friends - a number closer to the Hollywood blockbusters than most UK films) and offering fans the chance to be extras during the shoot, with many even flying themselves out to Mallorca for the chance to be involved.

While Entertainment knew a 12A trailer would increase eyeballs and build word of mouth, the film itself had to be classified 15 in order to retain the series’ brash sense of humour and reach its core demographic. The team worked closely with the British Board of Film Classification (BBFC) in a short time period to ensure that it made the grade: “I was pleasantly surprised with how little we had to change. We had to make a few cuts to the ‘Fernando’ scene, but what struck me about the BBFC response was that they all clearly enjoyed the film,” said Young.

Nearer the time of release, it became clear that the film had promising crossover appeal: “After a number of non-commercial previews for four different age groups, it was fascinating that the ratings from the under 25 women were higher than the response from the under 25 male. That quadrant gave the film its best rating and there was even an argument among girls and boys at a focus group about who the film was aimed at, ” remembers Young.

Dating was key. Going up against Paramount’s big-budget, sci-fi action Cowboys And Aliens was a daunting prospect. But according to Young, there was never any doubt in distributor Green’s mind: “Nigel chose the date in March in the belief that people would move away from us [which was true of at least one film of considerably higher budget]. He was not concerned about Cowboys And Aliens, which he believed would appeal more to the male over-25 demographic. In saying that, their campaign started much earlier than ours. Our campaign was very front-loaded. We looked at their heavy marketing and wondered whether it would wipe us out. I didn’t imagine the contrary would be the case.”

The August 17 launch meant the film entered after the summer’s key US debuts but still capitalised on the summer holidays and even coincided with students getting their A-level and GCSE results. That timing also meant a December 12 DVD release date, allowing a perfect run at Christmas.

While advance reviews were unlikely to dent the film’s success thanks to its in-built fan-base, Entertainment took the decision not to do any press screenings, which eliminated any chance of the film being hurt early by negative reviews.

The Wednesday 17 preview launch greatly benefitted from the UK’s Orange Wednesdays, a two-for-one tickets scheme offered by the mobile phone company. An estimated 500,000 people went to see the film in one day, excluding the plus ones from the scheme. On its first day the film took a cool £2.6m, a haul greater than last year’s biggest UK production, StreetDance 3D, managed from its first weekend and previews combined.

After its first weekend, the film had taken a whopping £13.2m and by the end of its fourth weekend the film was poised to join the UK’s top 30 films of all time and has become Entertainment’s fourth-biggest film behind The Lord Of The Rings trilogy.

The Inbetweeners Movie opened on 453 screens, rose to 486 in its third week and was still playing in a week-high 475 screens on its fourth weekend.

The adherence to a tried and trusted formula, in addition to a broader scope, new elements such as a Mike Skinner soundtrack, and a number of savvy marketing and distribution moves, all contributed to the film’s roaring UK success. But will the comedy translate abroad?

“We’re confident in the film, we feel it can travel,” says Young. Sales outfit IM Global has closed deals with Germany (Square One), France (French Connection), Australia (Village Roadshow), Canada (Maple), Italy (Eagle Pictures), Spain (Aurum) and Scandinavia (Nordisk) and is in talks with US distributors (a US TV version is currently in production, due to air on MTV). The next theatrical opening is in Australia on October 20.

As for a remake, Young is sanguine: “If there is a sequel it will come from the creative elements, of course. Everyone is downplaying the sequel but I’m sure Damon and Ian will be thinking about writing a sequel. We’ve talked about it. In the short term people are dispersing and doing other things but I’m sure in the medium term a sequel is very possible. It won’t be immediate but it’s definitely not closed.” Watch this space.