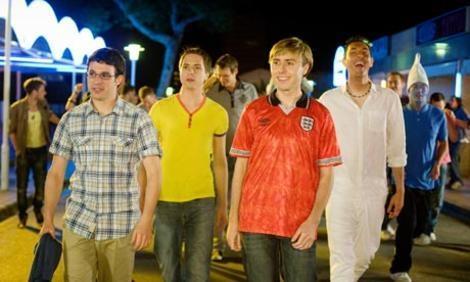 The Inbetweeners Movie made it a hat-trick atop the UK box office, becoming the third biggest grosser of the year so far. Entertainment’s comedy surpassed summer tentpoles Pirates Of The Caribbean: On Stranger Tides, The Hangover Part II and Transformers: Dark Of The Moon on the yearly chart after grossing a further $5.9m (£3.7m) to stand at an impressive $56.4m (£35.0m).

It’s unlikely to catch The King’s Speech’s haul of $73.6m (£45.7m) as the second biggest grosser of the year, but a drop of only 35% in its third weekend suggests the £40m mark is a distinct possibility.

Solid holdovers combined with generally lacklustre openings for new entries meant that Rise Of The Planet Of The Apes, One Day and The Smurfs occupied second to fourth on the chart for the second week in a row.

Fox’s Apes prequel managed to rise a place to second and has now amassed $28.9m (£17.9m), the tenth biggest grosser at the UK box office this year, after recording its fourth consecutive £1m+ weekend – a feat matched by The Smurfs as it held firm in fourth spot.

The week’s highest new entry belonged to Reliance’s Bodyguard as previews bolstered its opening to a superb $1.4m (£839,695) from just 51 locations to land fifth. This meant that the romantic comedy, a Hindi-language remake of director Siddique’s own 2010 Malayalam-language film of the same name, notched both this week’s highest location average at a whopping $26,552 (£16,465) and the biggest opening for a Bollywood film at the UK box office this year to date.

The former’s performance, coupled with sub-par openings for both Final Destination 5 and Conan The Barbarian last week (the latter of which dropped a huge 86% in its second weekend), suggests that when it comes to adult-orientated films, 3D isn’t the guaranteed money spinner that it’s proved to be over the summer with the likes of Harry Potter and Pirates 4.

Opening just outside the top 15 (when taking The Guard’s combined UK and Ireland figures into account) but each enjoying a more-than-respectable UK box office bow were Ayngaran’s Mankatha and Eros’ Bol managing averages of $11,126 (£6,899) and $6,838 (£4,240) respectively on their way to chart 16th and 17th.