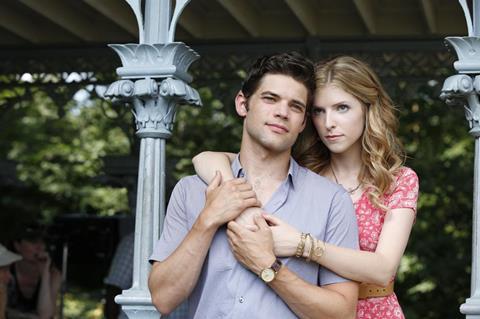 Trying to figure out how true love went south, The Last Five Years looks back at a marriage through song, resulting in a film full of joy, sorrow and melody — although, frustratingly, not enough insight. Based on Jason Robert Brown’s hit Off-Broadway musical, this romantic comedy-drama asks much of its stars, Anna Kendrick and Jeremy Jordan, who are often the only characters on screen, and while Kendrick especially melts the heart, the film adaptation from writer-director Richard LaGravenese ends up being a tad too insular to fully captivate.

The Last Five Years is one of Kendrick’s best onscreen performances because it plays to her considerable strengths. Adorable, witty and exuding indomitable charm, she is radiant as Cathy, who fears that her destiny may be as the supportive wife as opposed to the accomplished actress.

RADiUS has picked up North American rights to the film, which just premiered at the Toronto Film Festival. Kendrick’s growing fan base, especially those who loved her in Pitch Perfect, will flock, as will fans of the original musical. But because of its two-person story, The Last Five Years will also sit comfortably on the small screen, making the film a natural for VOD, which is RADiUS’ speciality.

As the film opens, Cathy (Kendrick) is coming to terms with the fact that her husband Jamie (Jordan) has left her. A struggling actress, Cathy recalls the last five years of their relationship, which saw them fall in love, Jamie find success as a novelist and Cathy grow increasingly resentful of Jamie’s literary stardom. These flashbacks, shown out of chronological order, are delivered as musical numbers, with the two actors singing their dialogue to each other.

With The Last Five Years, LaGravenese seeks to make, essentially, a realistic musical, one in which life happens as normal except for the fact that the main characters speak through song, their love affair’s peaks and valleys captured in up-tempo numbers and teary ballads. (Consequently, there are almost no choreographed dance sequences so as to emphasise the story’s everyday quality.)

This approach can reap dividends thanks to the easy rapport between the actors. Also helpful is the fact that Kendrick and Jordan both have musical backgrounds, which allows them easily to handle the high-octane emotions within Brown’s songs. While not enough of the tunes are instant standouts, many of them have a blunt melodic force that drives home each tune’s point with striking clarity. (And in the case of a song like A Summer in Ohio, about Cathy’s frustration at doing regional theatre, they can be plenty sexy and funny.)

The Last Five Years’ nagging limitation is that, while the end of love always brings sadness, Cathy and Jamie’s relationship doesn’t seem particularly unique or dynamic enough to warrant such lavish treatment. If Cathy is trying to sift through the pieces as the film begins, the rest of The Last Five Years doesn’t necessarily answer what went wrong beyond rather generic reasons such as shifting priorities and conflicting desires. This is not meant to sound callous but, rather, to suggest that the unravelling of their bond plays out surprisingly perfunctorily, producing not enough of the pathos and heartbreak one would expect.

The other problem is that The Last Five Years shows far more sympathy for Cathy, as Jamie’s rising stardom opens up the door for extramarital affairs and a ballooning of his own self-importance. In one of the film’s key final songs, “If I Didn’t Believe in You,” Jamie gives her some tough love, arguing that just because he’s more successful than she is at the moment, that doesn’t mean that he’s stopped supporting her — or that he should feel guilty because he’s getting his break now. It’s a powerful notion about how unequal partners must reconcile their different positions, but the scene feels largely unprovoked since Jamie largely leaves Cathy behind once his book takes off. (We don’t get a sense of two sides of a complicated relationship.) Consequently, Jamie comes across as the guilty party in their marriage’s dissolution, which isn’t helped by Jordan’s faintly melodramatic turn as the rising young star.

By comparison, The Last Five Years is one of Kendrick’s best onscreen performances because it plays to her considerable strengths. Adorable, witty and exuding indomitable charm, she is radiant as Cathy, who fears that her destiny may be as the supportive wife as opposed to the accomplished actress. Not only can Kendrick sing, she can perform a song’s emotions effortlessly, creating a naturalness that negates the awkward staginess that LaGravenese occasionally brings to the production. In films like this, Pitch Perfect and hopefully the forthcoming Into The Woods, she proves that she’s not just an ace comic actor but also one of our best young musical talents. The Last Five Years is far from perfect, but it at least allows her another opportunity to let that talent shine.

Screenplay: Richard LaGravenese, based on the musical by Jason Robert Brown