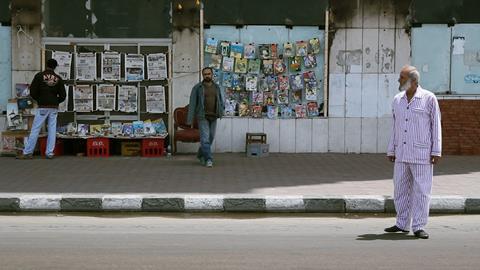 The stories do not interact, but have a link in that all of the lead characters share an underlying sense of concern about their home city.

A lack of star names, its rather freewheeling structure and a lack of a link between the sub-plots may hamper broad distribution, but this collaborative film – made on an almost zero budget, with cast and crew volunteers and with the directors all working as cinematographers or assistant directors on the their colleague’s films – belies its small-scale origins, and hints at strong futures for its group of new, young, filmmakers.

The stories do not interact, but have a link in that all of the lead characters share an underlying sense of concern about their home city, which they seem to wander burdened by fears or confusion…some more than others.

Amr (Zeyad Salem) comes back to meet his father in his death bed, but is not sure how to show his true feelings; Moussa (Kamal Ismail) spends his day afraid of crossing a street until he finds amends with his side of the road, and Dahlia (Noura Saafan) on her wedding day, seems lost in worries about her off white marriage.

Meanwhile a young girl (Malak Magdy) discovers her grandmother’s decay through her play time; Rawya (Hanan Youssef) starts sleeping late after her husband dies and discovers a new exciting life at night and finally Maha (Nihad Yahia), packing to leave the country, starts questioning how she may change when she moves away.

As is the nature of such films, some strands are always more involving than others. Kamal Ismail is impressive as an old man in red-stripped pyjamas who seems unable to cross a busy road, while Nihad Yahia is striking as Maha, an independent young woman who gets increasingly concerned that leaving her homeland will cause great changes in her. There are gentle moments of humour (especially when the young girl spills her bag of crisps over a man in prayer) and elements of subtle drama, but at heart the film is a snapshot of various lives all of whom share a certain unease, and is all the getter for not trying to offer up a grand dramatic moment.