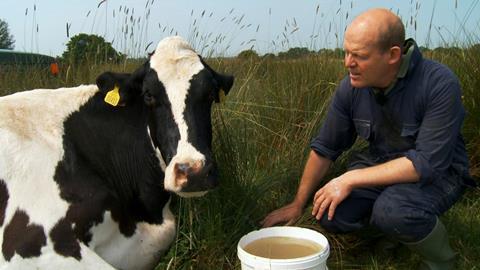 A gently watchable pastoral pleasure, Andy Heathcote and Heike Bachelier’s traditionally styled documentary The Moo Man follows four years in the life of a genial British farmer who struggles to get by in a financial climate that offers little support for small family farms.

It is a gentle, genial and engaging film, perhaps lacking the ‘wow’ factor so many documentaries seem to have to have, but oddly all the more watchable because of that.

Steve Hook and his father run Hook & Son, a small operation of less than 100 cows who graze on his land on the idyllic Pevensey Levels in the south of England, with the operation eschewing the policies of cost-cutting dairies and supermarkets and instead keep things small and compassionate, with Steve knowing virtually each cow by name and personality.

On his farm the cows have a life expectancy of nine or ten years (or more sometimes) – unlike most dairy farms where it is around six years – and on the whole they are a good-natured and lively bunch, with Steve paying perhaps most attention to 12 year-old Ida, the ‘Queen of the herd’ whose image is also used on the farm’s marketing campaigns.

Steve is a low-key charmer, happy to chat to his cows and often working to their pace of life rather than pushing them to conform to his. We see him delivering calves – and unlike many farms he doesn’t kill the males, instead growing them for beef – and hand filling his bottles of milk (until the arrival of a mechanised system at the end of the film), while also admitting that things are tough. He sells raw, unpasteurised milk (and does the delivery round himself) and is evangelical about the taste of his raw product.

It is hard not to be impressed – and often moved – with his open and honest compassion. He tries hard to do his best (even when it seems the animal may be a lost cause) and there is a very visible sense of upset when one of his cows dies. That is not to say isn’t also a pragmatic farmer…simply that these animals are more than numbers.

Director Andy Heathcote and codirector Heike Bachelier never ask questions or intrude in the often bucolic bovine story, meaning that they get some charming and often funny moments in amidst the herd as Steve gently tries to bend them to his will…often failing, but never getting angry. It is a gentle, genial and engaging film, perhaps lacking the ‘wow’ factor so many documentaries seem to have to have, but oddly all the more watchable because of that.