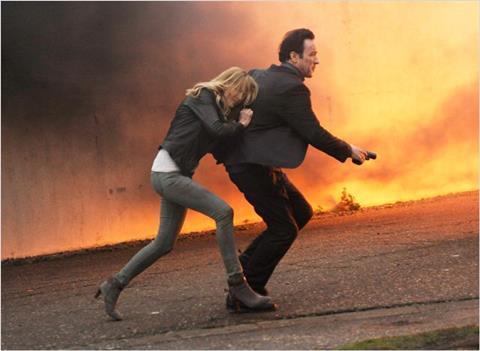 Danish director Kasper Barfoed makes his American debut with The Numbers Station, a serviceable CIA spy thriller whose solid international cast, led by John Cusack, doesn’t quite make up for the film’s lack of scope and flair. VOD and ancillary markets look likely to give this US/UK financed production its best chance of making the numbers add up.

During the long middle section in which the action is confined to the bunker-like station neither director nor script (by first timer F Scott Frazier) finds much or real interest to do with the characters or setting.

Cusack (most recently seen on the big screen in The Paperboy) is well cast as Emerson Kent, a usually ruthless CIA hit man who finally balks at killing an innocent young woman. Given a last chance to prove himself, Emerson is reassigned to a ‘numbers station’ - a secret facility that broadcasts encrypted messages to CIA field agents around the world - in rural England, where he spends uneventful hours shepherding Katherine (Swedish-Canadian actress Malin Akerman, from Watchmen  and the forthcoming CBGB), the station’s inexperienced code operator. When the station is mysteriously attacked, Emerson and Katherine are suddenly caught in a life-or-death struggle with an unknown enemy.

Barfoed (whose Danish credits include The Candidate and TV series Dicte) gives the early scenes involving Emerson and his CIA boss (played by Ireland’s Liam Cunningham, from Game of Thrones) a degree of neo-noir style.

During the long middle section in which the action is confined to the bunker-like station, however, neither director nor script (by first timer F Scott Frazier) finds much or real interest to do with the characters or setting. There are decent spurts of fight action and gunplay, a bit of emotional interaction and some intrigue about how Emerson will balance Katherine’s safety against the demands of his Agency overlords. But none of the plot turns are substantial or involving enough to make the film feel really engaging.