The Smell Of Us 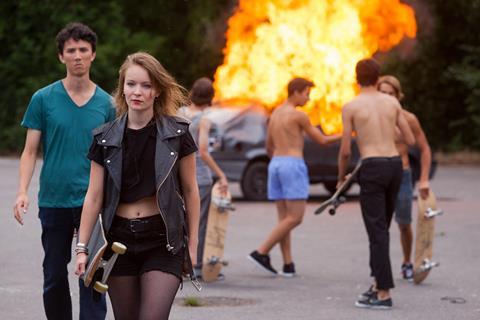 Selfish and spoiled disenfranchised youth or confused and naive teens struggling to adjust to the onset of adulthood? Perhaps the truth lies somewhere in the middle in The Smell Of Us, very much ‘un film de Larry Clark’ - as the credit cries out - as he treads familiar water with his French kids misbehaving in a similar fashion to the ones he tackled in the US.

The Smell Of Us – yes, there is plenty of sniffing of youthful flesh – is, of course, a provocative and challenging film.

As with his 1995 breakthrough film Kids, the film is love letter of sorts to the fresh-faced and un-lined beauty of conflicted and sexually-charged youth, though shifted from the savvy skateboarders of New York’s Washington Square to the super-cool Euro skateboarders of the Palais de Tokyo in Paris. It seems little changes in Larry Clark’s vision of skateboarding youth, which in the end makes this 2014 variation intriguing and thoughtful at times, littered with beautifully composed scenes but ultimately rather tacky and unconvincing. On screen sex and drug taking may prove problematic for some territories and ratings boards.

The Smell Of Us – yes, there is plenty of sniffing of youthful flesh – is, of course, a provocative and challenging film, as Larry Clark presents his vision of French youth culture. The characters are largely bland and one-dimensional, but then these are not fully formed youthful characters, rather a series of traits, sexual experimenters and angry youth there to offer up a broad version of the confused naivety of troubled Parisian teen skateboarders.

The film opens elegantly as a gang of kids descend early morning at The Dome, behind the Museum of Modern Art, opposite the Eiffel Tower, practicing their skateboarding skills by attempting jumps over a sleeping drunk they call Rockstar (actually played by director Larry Clark). According to his director’s note “this is the character of transmission, in his drugged up songs he delivers his message to them.” This is rather overstating the need for the character, who also appears in two scenes with a bearded, guitar-playing singer (played in by Michael Pitt, who starred in Clark’s film Bully), who also offers little beyond distraction.

The key central young character is Math (Lukas Ionesco), a sullen, blank but angelically good-looking youth who makes money as a rent boy, but also attracts the adoration of friends JP (Hugo Behar-Thinieres) and Marie (Diane Rouxel). JP, in love with Math, also sells himself to keep up with his friend, while Marie works her way into their friendship, but ultimately contrives to drive them apart, leading to tragic results.

Other of their skateboarding friends also try their hands at rent boy work, but the core of the film is Math’s visitations to various clients (including one who noisily sucks on his toes) as his friends circle this beautiful but rather empty youth. Perhaps most disturbing is a scene with Math and his drugged/drunken elderly mother (Dominique Frot), where she provocatively suggests them licking each other. (A perhaps heavy-handed explanation, but it is all that Clark offers by way of justifying their behaviour expect that they are from money and their parents don’t understand them.) As his mother describes Math:” He’s a peacock who drags his little ass through Paris.”

The film, though, is littered with stylish and beautiful moments. As well as long and lingering footage of chests, groins, breasts and boxer shorts, there is also an overt link to art and culture (though a fashion show scene offers nothing to the film except reinforcing the blankness of their personalities) and Clark comes up with great use of Paris as a backdrop and delivers one beautifully structured scene with Marie sat on a railway bridge with her skateboarder friends on the road in the distance and a train passing by. Delightfully composed and rather memorable.