The SpongeBob Movie: Sponge Out Of Water 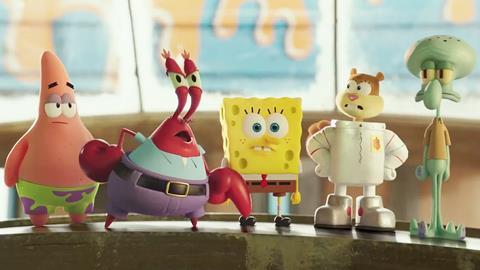 The second big screen take on SpongeBob SquarePants preserves the sweet, surreal charm of the long-running Nickelodeon cartoon series and adds a bit of novelty by mixing some 3D live action in with its 3D animation. But while there’s still eye candy and silly jokes for younger kids, the charm is spread pretty thinly over a fussy and not very engaging story and the live action doesn’t, in the end, add much to the appeal.

The characters – which at one point become super-hero versions of themselves – aren’t as charming in their on-shore CG forms and the live action/animated sequences consist mostly of standard slapstick action.

Worldwide distributor Paramount opened The SpongeBob Movie: Sponge Out Of Water over the weekend of January 30 in Mexico and a few other territories and should have a shot at beating the $54.7m taken internationally by 2004’s The SpongeBob SquarePants Movie, given the international spread of the series over the past decade.

Matching the first film’s $85.4m domestic take might be trickier when Sponge Out Of Water arrives in the US on February 6, more than 15 years after the series began its run.

With the series’ voice performers all playing their usual characters for the big screen, the movie - directed by Paul Tibbitt (executive producer of the series and writer of the first film) and written by Jonathan Aibel and Glenn Berger (Kung Fu Panda 2) - finds the undersea town of Bikini Bottom thrown into post-apocalyptic chaos when the recipe for Krabby Patties is stolen.

Eternal adversaries SpongeBob (voiced by Tom Kenny) and Plankton (Mr Lawrence) join forces to retrieve the recipe and the quest allows the film, using the same vintage animation style as the series, to spin out a psychedelic time travel sequence and an excursion into Bob’s eternally happy brain. There’s also a song and a moral about the value of teamwork.

About two thirds of the way through the story, SpongeBob, Plankton, starfish Patrick (Bill Fagerbakke), Squidward (Rodger Bumpass), scientist squirrel Sandy (Carolyn Lawrence) and Mr Krabs (Clancy Brown) have to go above water into the human world to catch up with new character Burger Beard (played by Antonio Banderas), a grungy pirate with ambitions in the catering trade.

The characters – which at one point become super-hero versions of themselves – aren’t as charming in their on-shore CG forms and the live action/animated sequences consist mostly of standard slapstick action.