The Trip To Italy 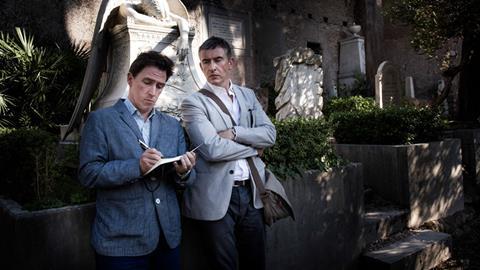 The second go-round is almost as fun as the first in The Trip To Italy, a jolly sequel to the 2010 TV series-turned-film The Trip. Perhaps predictably, director Michael Winterbottom and stars Steve Coogan and Rob Brydon can’t fully reproduce the novelty and emotional depth of the original. But the leads’ tart comedic rapport remains exquisite as they once again play fictionalised versions of themselves, traveling, eating and riffing for our considerable amusement.

If the pleasant contentiousness between Coogan and Brydon isn’t so palpable this time, there’s still an acknowledgment that a seemingly relaxing getaway will always be rife with tension and uncertainty because of all the worries waiting for you back home.

Debuting in the Premieres section at the Sundance Film Festival, The Trip To Italy will certainly be sought out by the original’s fans, who won’t be too disappointed to learn that Coogan and Brydon essentially recycle the narrative spine of the first film, except in Italy rather than England. Coogan’s profile Stateside is actually bigger now than when the first film came out, thanks in part to his recent Oscar nominations as a producer and writer for Philomena, although it’s doubtful that will help bolster Italy’s US grosses substantially.

As in the first film, The Trip To Italy follows along as Coogan and Brydon hit the road to tour glamorous restaurants and write about them. The faint tension between the two men has subsided, although they both are again contending with personal issues including family and career.

Incorporating clearly improvised segments, The Trip To Italy replicates the first film’s winning formula of beautiful locales and funny conversation, particularly when Coogan and Brydon compete to see who can do the better impression of famous actors like Michael Caine, Marlon Brando and Pierce Brosnan. There’s familiarity in their back-and-forth banter, but it’s churlish to nitpick when so much of their conversation remains delightful.

Much like a hip My Dinner With Andre, The Trip To Italy easily segues from intriguing talk about the legacy of Lord Byron to what it must have been like to work on The Dark Knight Rises with two intense actors (Christian Bale and Tom Hardy) whose characters’ dialogue was completely incomprehensible. This will probably be the only film this year in which the leads quote poetry when they’re not discussing why movie sequels just about never work.

Despite the plethora of verbal gems, Italy’s missing element is the contentious dynamic that helped the first film not just be funny but also unexpectedly poignant and universal, touching on the ways that male friendships are almost always laced with a degree of competiveness. We still see some of Brydon’s quiet jealousy of his more-famous friend (and of Coogan’s desire to remain alpha in their relationship), but since that previous edgy interplay is not a major component of Italy, the ribbing stays more on the surface, the jabs mostly for sport rather than getting at something deeper between them.

That’s not to say, however, that Winterbottom and his two actors completely eschew more emotional territory. Brydon’s anxieties about fatherhood produce unexpected consequences during their journey. And Coogan’s difficulty connecting with his son (Timothy Leach) provokes him to wonder if he really wants to keep doing the television show he’s filming far away in Los Angeles.

If the pleasant contentiousness between Coogan and Brydon isn’t so palpable this time, there’s still an acknowledgment that a seemingly relaxing getaway will always be rife with tension and uncertainty because of all the worries waiting for you back home. And as light as much of Italy is, Winterbottom manages to end on an impressively wistful note that suggests the melancholy running beneath the steady stream of quips.

The two men’s comic timing remains flawless, with Coogan more of the deadpan wit and Brydon the gleeful joker and show-off. Of the supporting cast, Rosie Fellner is the standout as a tour guide whose sweet charm proves to be too tempting for one of our leads. Still, she’s not as ravishing as the men’s meals, which are gorgeously lit.