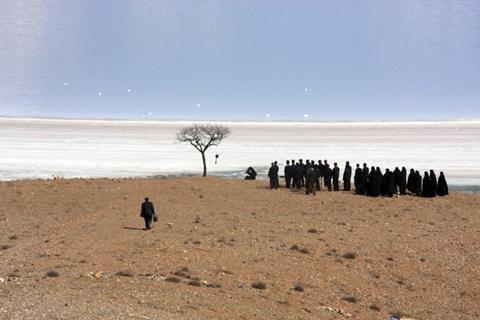 Mohammad Rasoulof ‘s The White Meadows is a mesmeric, discomforting journey - punctuated by enigmatic motifs and metaphors - through a nightmarish bleached-white landscape of barren salt marshes. Defying any genre, the fable-like tale follows the odyssey of a man who sets out by boat to collect the tears of the inhabitants scattered across an archipelago of stark, inhospitable islands on a nameless sea.

On the whole, this is a grimly silent world – for much of the film there is no musical score.

It’s an unsettling experience and a ponderous one too, but the film’s eerie beauty will probably ensure that it finds a festival and possibly arthouse berth. The fact that it can be read as an oblique essay on the state of affairs in contemporary Iran could possibly add commercial resonance, although it is a challenging prospect.

A blanched white sea and wan sky meld along an invisible horizon, leaving the viewer no visual compass, as Rahmat (Hasan Pourshirazi) navigates the still waters between the hellish salt islands. On each one, he encounters forlorn residents who seem unfazed by his custom of collecting their tears in tiny phials. He has clearly been here before. His first port of call is an island where a young woman has died and where, amid relatives’ sobs and wails, he sets about his work.

Cinematographer Ebrahim Ghafouri has done an astonishing, painterly job. Like the Romantic painter Caspar David Friedrich, he sets the human figure in diminished perspective amid expansive landscapes. Blasted trees stand forebodingly in the barren salt wasteland, dead birds litter beaches like washed-up detritus, and a wailing virgin is placed on a sacrificial bridal bier and set adrift on the awesome expanse of the sea.

Carefully choreographed and clad in black, the inhabitants move as one across the broad bleak frames in agonisingly long takes. This is a land where the collective prevails over the individual, where the inhabitants are grievously oppressed by the weight of ancient custom and tradition. It’s for the best that the young woman died, says one male villager – she dressed and walked provocatively, leaving the menfolk thirsty for more.

That transgression must be punished in this world is made clear by the fate of a young stowaway who removes some of Rahmat’s collected tears. Social control is evident on another island where a painter is tormented by the community for painting the sea red rather than blue and is repeatedly urged to see the error of his ways.

On the whole, this is a grimly silent world – for much of the film there is no musical score. But the director amps up the sound of dripping water, flickering camp fires, desolate winds and spine-tingling primal chants. It’s an initially gripping film: our anthropological curiosity is immediately aroused by the strange communities and their often brutal customs. But this same curiosity goes quickly from piqued to peaked as the boatman visits island after tedious island and we grasp that there are going to be no easy answers. Rather, we are faced with an allegory that refuses to operate within conventional expectations of realism, and a metaphor that stores a wealth of hidden meanings under a stark white surface.