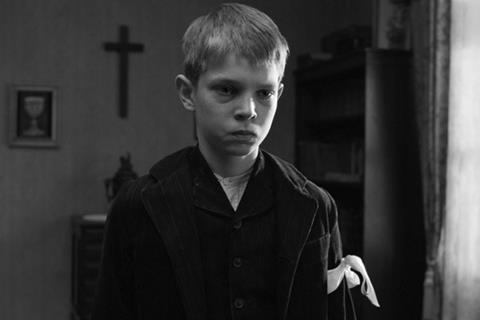 When he is on top form Michael Haneke’s artistry and unerring control of his material is hard to beat. And he is on top form in The White Ribbon, a meticulously constructed, precisely modulated tapestry of malice and intrigue in a rural village in pre-World War I northern Germany. It’s a rich, detailed work pregnant with the sinister undertones and evil deeds for which the film-maker’s work is legendary and won’t disappoint Haneke fans waiting for fresh material after his experimental US remake of Funny Games.

At times, The White Ribbon is so rich it could be a mini-series, yet it is always a Haneke film

Sony Pictures Classics pre-bought the film on the eve of Cannes, already suggesting The White Ribbon’s potential as an event for arthouse distributors. Ostensibly, it’s not the easiest sell – it’s nearly two- and-a-half hours long, shot in black-and-white and features a plethora of vile characters – but the Haneke name, the scale of the piece and an uncharacteristically warm central character will boost its prospects, not to mention the fact that from the start the film is a whodunnit with all the mystery and taut tension that the genre entails.

The film works on several levels – as a story of hypocritical adults and their unbalanced children, a picture of patriarchal community life and a snapshot of how 20th century Germany was shaped.

It’s also Haneke working in unusually classical fashion. Aided by crisp, often startling images shot by Christian Berger, the film-maker weaves his web of storylines with a traditional voiceover, a linear narrative and fine period detail. At times, The White Ribbon is so rich it could be a mini-series, yet it is always a Haneke film, probing under the surface of appearances into the malevolence of the human soul.

Created and written by the director with script guidance from the great Jean-Claude Carriere, The White Ribbon takes place over two years from 1913-1914 in a staunchly Protestant, rural community in Northern Germany. Narrated by an old man (Jacobi) recalling his years as the village schoolteacher (when he is played by the appealing Friedel), the story begins with a mysterious accident in which the local doctor (Bock) falls off his horse and breaks his collarbone, apparently tripped by a wire planted at the gate to his house.

We are introduced to the town’s aristocratic landowner The Baron (Tukur) and his wife (Lardi), the self-righteous pastor (Klaussner, giving the film’s most memorable performance) and two of his long-suffering offspring Klara (Dragus) and Martin (Proxauf) whom he forces to wear white ribbons as a reminder of purity and innocence. Other characters include the doctor’s housekeeper and lover (Lothar) and the daughter whom he abuses (Roxane Duran), the steward of the baron’s estate (Josef Bierbichler) and a local farmer (Samarovski) whose wife dies soon after the doctor’s accident.

While the schoolteacher woos a 17-year-old nanny (Benesch) to be his future bride, further strange events continue to take place in the village. The son of the baron is found flogged, a barn is burned down, a mentally ill child is found brutally tortured. Each of the incidents implies that a punishment is being carried out, but neither police nor villagers can get to the bottom of the crimes.

Of course, this being Haneke, there is nothing as simple as a reveal in which the culprits are unveiled. Instead, he takes pleasure in the tensions along the way and the catastrophic repression behind every sentence uttered. The villagers of The White Ribbon are quite the most disturbed ensemble of characters to emerge from a film-maker’s mind in some years.

Cruelty and injustice are rampant in Haneke’s village, from the tenant farmers dependent on the baron’s goodwill to the menfolk’s treatment of children and women. Some audiences may flinch at the unpleasantness – which include a vicious verbal humiliation by the doctor of his lover, sadistic verbal putdowns and children being thrashed (depicted offscreen).

But all is not as straightforward as it seems. The possibility that the children themselves have become monsters bears chilling implications for the events which will take place in Germany over the following 30 years.