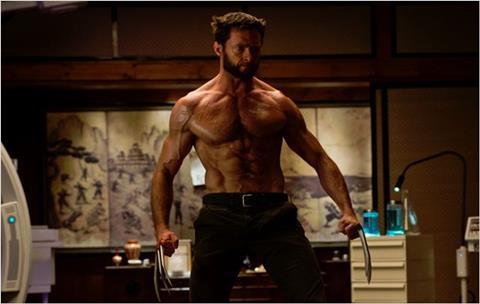 Hugh Jackman returns as Logan, aka the Wolverine – the claw-popping, angst-ridden, near-immortal Canadian mutant superhero Marvel Comics introduced as a Hulk opponent in 1974 but nurtured into a tentpole character after he joined the then-struggling X-Men book the following year. Jackman’s Wolverine was introduced in Bryan Singer’s X-Men in 1999 and has snarled, slashed and charmed his way through two sequels to that (plus a funny cameo in X-Men First Class) and one previous spin-off, but all of those films (even Gavin Hood’s 2009 X-Men Origins: Wolverine) have made the supposed loner hero join teams of equally gifted, colourful personalities.

Though Jackman’s star turn is finally allowed to dominate, there’s a sense that all this is too easy for actor and character.

Adapting writer Chris Claremont and artist Frank Miller’s 1982 comics miniseries Wolverine, screenwriters Mark Bomback, Scott Frank and Christopher McQuarrie cut the hero off from the previous films and have him stand his own ground — save for recurring appearances by Famke Janssen as the guilt-induced spectre of Jean Grey, the mutant Logan pined for but was forced to kill in Brett Ratner’s unloved X-Men: The Last Stand.

Scarlet-haired, lollipop-outfitted precognitive mutant Yukio (Rila Fukushima) tracks Logan to the Canadian Northwoods, where he has been living in a near-feral state of friendship with bears, and persuades him to hop on a private jet to Japan, where he is supposed to receive an antique sword from dying industrialist Yashida (Hal Yamanouchi), whose life he saved during the atomic bombing of Nagasaki.

When yakuza assassins disguised as Buddhist monks try to snatch Mariko from Yashida’s funeral, Logan protects her – though Viper’s double-dealing disables his famous healing powers so he now sustains lasting wounds in his battles with hit-men.  Ninja archer Harada (Will Yun Lee) is alternately ally and enemy, and the hero’s quest takes him to a castle where he confronts giant cyborg, the Silver Samurai, whose heated blades are tough enough to clip his claws.

James Mangold, whose previous career has straddled serious drama (Girl, Interrupted, Walk The Line) and tosh (Identity, Knight And Day), previously worked with Jackman on the underrated time travel rom-com Kate & Leopold) and gives the star opportunities to be impressively feral and physical, more often stripped to the waist than fully-clothed and never seen in anything approximating the spandex and leather look of most superheroes.

Aside from the slinky, skin-shedding Viper and the Iron Manga-look Silver Samurai, this takes place in a world closer to Sidney Pollack’s The Yakuza, John Frankenheimer’s The Challenge or Ridley Scott’s Black Rain (all of which feature Western tough guys confused by Japanese criminal society) than any of the other Marvel movie properties.

A recurrent problem with Wolverine, in comics and the movies, is that he has an 18-certificate super-power in a PG (or, here, PG-13) medium.  He can slice through inanimate objects with his adamantium claws, but anything he does to flesh and blood people has to be kept offscreen – the only wounds we see are his own, which heal supernaturally fast.

Given that this adventure involves multiple claw-fights with samurai, ninja and yakuza, too many of the set-pieces seem unfocused and vague, with it being unclear what exactly the Wolverine is doing to his enemies.  Logically, there’s a Kill Bill Part 1 extravaganza of gouting veins and lopped-off limbs just out of frame, but a summer blockbuster film on this scale can’t show it.

The most impressive sequence is a battle with killers on top the Japanese bullet-train, when the claws are mainly used to anchor the hero to the speeding train as villains fly off at every turn.

Though Jackman’s star turn is finally allowed to dominate, there’s a sense that all this is too easy for actor and character.  The subplot about Logan losing his invulnerability doesn’t really go anywhere and things are reset to the default before the climactic snikt-fest, and his arc from maundering self-pity to involvement with the heroine depends too much on faded leftovers (can anybody be expected to remember what happened in X-Men: The Last Stand?).

Of the freshly-introduced characters, only Fukushima’s scrappy orphan mutant registers enough to be kept on for subsequent movies – and her strength shows up a plot problem in that it seems shallow of Logan to prefer the bland, submissive, occasionally suicidal, self-imperiling Mariko as a love interest.

Given that the character’s and Jackman’s popularity was enough to get this greenlit after the generally-disappointing X-Men Origins: Wolverine, it seems likely that this will generate solid audiences – though the traditional Marvel Movie buried-in-the-end-credits teaser (which brings on two familiar series faces) seems to indicate more excitement about the forthcoming X-Men: Days of Future Past (in which Jackman will return again) than any further solo Wolvie adventures.