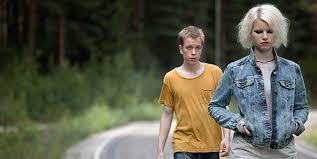 Finnish director J-P Valkeapää’s film (a follow-up to his debut The Visitor) may feel to begin with that it is heading into familiar territory, but his story of a young runaway couple cleverly heads into darker territory and becomes as much a delightfully mannered fairytale as the story of a couple on the run.

Director JP Valkeapää crafts an often surreal world for the pair to escape to, much aided by Pietari Peltola’s wonderfully evocative visuals.

They Have Escaped (He ovat paenneet), which premiered at Venice and also screens in Toronto, has the quirky qualities and artistic twists to appeal to niche distributors and is likely to also feature at further film festivals. While low budget and lacking in big names, it should benefit from strong reviews and a good word of mouth.

Joni (Teppo Manner) is a mild-mannered 19 year-old with a stutter who is sent to a home for difficult youngsters after he goes AWOL to avoid his military service.  There he meets rebellious dyed-haired 17 year-old Raisa (Roosa Söderholm), who is desperate to make her escape.

Luckily Joni has a car that he uses to get groceries for the home’s catering and feisty Raisa soon uses her feminine wiles to convince the painfully shy Joni to escape with her – even though he knows full well he could be sent to prison if he leaves the correctional institution.

So far, so familiar. But after this pedestrian start the film slowly starts to veer off into darker territory, aided by a slyly unnerving soundscape and some strange image intercut into the story (they could be flashbacks, nightmares or something to some) that helps They Have Escaped become thing rather unusual and special.

Both Roosa and Manner are terrific as the troubled teens attempting to carve their own existence in an adult world who won’t tolerate their behaviour, while director J-P Valkeapää crafts an often surreal world for the pair to escape to, much aided by cinematographer Pietari Peltola’s wonderfully evocative visuals.