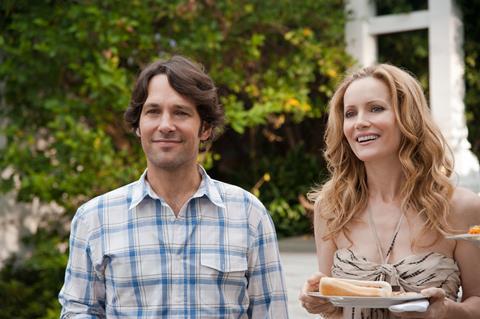 Using two characters from his 2007 hit Knocked Up to explore the challenges of youngish parenthood, comedy impresario Judd Apatow shows his more reflective (though still R-rated) side in This Is 40. There are enough effective moments - comic and sometimes dramatic - to keep the film moving pleasantly along, but the rambling feel might in the end make this one of Apatow’s more middling box office performers.

Perhaps the film’s most enjoyable aspect is its supporting cast, much of it drawn from what’s almost become the Apatow repertory company.

Worldwide distributor Universal opens the film on the busy pre-Christmas weekend in the US and will be hoping that likeable leads (and Apatow regulars) Paul Rudd and Leslie Mann can lure at least a portion of the young couples crowd away from holiday shopping. The film may benefit from getting more space in the international marketplace, where openings follow in the first quarter of next year.

Directing from his own script for the first time since 2009’s Funny People, Apatow introduces Rudd’s indie record exec Pete, Mann’s age-obsessed wife Debbie and their two daughters as a bickering but basically loving modern family.

However, over the course of the three-week story, bookended by Pete and Debbie’s fortieth birthday parties, financial pressures, ageing parents and a rebellious teenage daughter start to threaten the family peace.

Apparently given license to improvise by their director, Rudd and Leslie produce some quick fire banter that sometimes works and sometimes goes on a bit too long. The comedy is mildly raunchy but never outrageous, taking in gags about vaginal and rectal exams and Viagra-assisted sex.