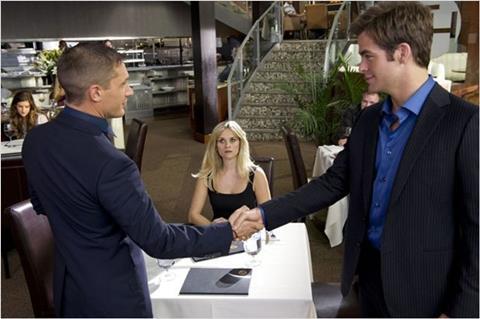 A mirthless, preening action comedy populated with gorgeous caricatures, This Means War isn’t so much an imitation of life as it is a setpiece-focused aping of other movies that have more sincerely attempted to commingle spy or assassin hijinks, gunplay and romance, like Mr. & Mrs. Smith, Knight & Day, Bad Boys and The Whole Nine Yards. Directed by McG, it’s indefatigably paced but consistently insulting to viewers’ intelligence.

The film’s star power and a Valentine’s evening nationwide sneak preview should work to its advantage, but strong weekend competition and lukewarm word-of-mouth should dent earnings. And the last time Reese Witherspoon found herself stuck between two guys battling for her affection, in 2010’s How Do You Know, the result was a commercial underperformer, to the tune of $30 million domestically and less than $50 million cumulatively. Ancillary value should remain high, however, just based on the profiles of its participants.

After they botch an undercover Hong Kong snatch-and-grab operation and in the process kill the brother of bad guy Heinrich (Til Schweiger), Los Angeles-based CIA partners and best friends FDR (Chris Pine) and Tuck (Tom Hardy) find themselves temporarily benched to desk duty by their boss. Suave and self-assured FDR suggests to Tuck, who is unable to reconcile with his ex-wife Katie (Abigail Leigh Spencer), that he reenter the dating world.

Tuck does, and meets Lauren Scott (Reese Witherspoon), a product evaluator for a consumer report magazine. Unbeknownst to both, FDR also crosses paths with Lauren, and begins to woo her. When they find out they’re unwittingly dating the same woman, FDR and Tuck enter into a clandestine gentleman’s agreement to keep their friendship secret from Lauren and let her choose which man she wishes to keep in her life. With a vengeful Heinrich honing in on the guys, however, it’s not long before everyone is facing literal rather than just metaphorical imperilment and devastation.

This Means War bears much in common with the slick, colourful fantasy worlds of McG’s Charlie’s Angels movies, as well as work he has overseen on the small screen, like Fastlane, The O.C. and Chuck. The look is polished, and favors kinetic movement and unremarked upon opulence over sense. (Here, FDR lives in a glass-ceilinged apartment under a rooftop pool, affording him a view of swimming babes, while apropos of nothing Tuck produces a date in an abandoned arena featuring a trapeze set). Drama and emotion in McG’s worlds are achieved through poses — contrived, super-saccharine reproductions of achievable grand gestures in cinematic antecedents.

If a film like Superbad could, against the backdrop of so many shenanigans, credibly establish a hetero-normative, platonic love story between its two male leads, This Means War could in theory interestingly tap into a similar anxiety of adult male separation, while also contrasting it with FDR and Tuck’s respective, alpha-male competitive impulses. It does not, however.

Owing to his copious experience with secret agents, Simon Kinberg was brought onboard for a rewrite of a story credited to Timothy Dowling and Marcus Gautesen, but all of the dating tidbits unfold in artless and discrete scenes in which Lauren’s friend Trish (Chelsea Handler) goads her into seeing both men.

The action “sizzle” arrives via occasional cheery blasts of brainless, bloodless, consequence-free shootouts, designed so as not to challenge or offend. In encouraging its audience to think so little, however, This Means War also diminishes to the point of negligible existence any care or investment about what unfolds on screen.

Lauren’s background and experience as a professional assessor isn’t exploited for full comedic effect. And given that much of the movie’s spy-versus-spy specifics are delegated to two anonymous teams of fellow CIA agents that FDR and Tuck recruit (there’s apparently nothing better to do with government resources), there’s not even a geeky or clever connection to any high-tech gadgetry for audiences to latch onto.

When not betraying its characters’ natures (a supposedly reticent and lovelorn Lauren meets cute with FDR in flirty, suggestive fashion), the movie further hampers itself by imposing an artificial one-week constraint on the narrative proceedings that render it even more improbably and ridiculous.

Editing, particularly when fisticuffs or other action is involved, is often jarring and nonsensical.

The performers, especially Witherspoon, look lovely, but remain incapable of lifting this material to anything even approaching passable entertainment. Only Handler, who tears into her role as the married best friend living vicariously through her single girlfriend, breathes a modicum of wild yet believable life into This Means War.