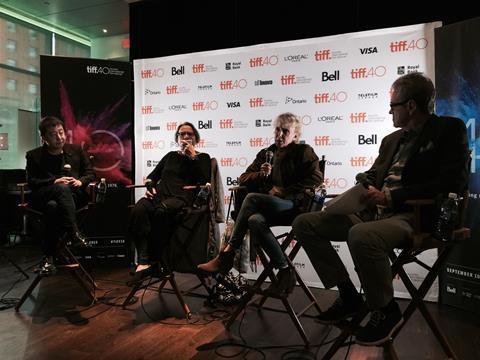 “This section represents a compilation of films we want to champion in the festival; films that are much like these talented directors whose body of work has been widely screened at the festival,” said Handling.

While the 12 films in the selection are up for a $25,000 prize, Handling insisted it is not a competition.

“This festival has never focussed on awards,” he said. “What we hope is this prize money will be a huge shot in the arm for who ever wins.

“It will give the filmmaker credibility, and bring attention to their film, which is important in this marketplace and changing landscape.”

Both Handling and programming head Cameron Bailey watched between 300 - 400 films, with a view to find films that are often overlooked amidst the sea of awards season contenders that Toronto has become known for.

Attempting to “rebalance and recalibrate”, a decision was made to put a spotlight on films that lacked distribution and media attention, and that gave a voice to worldwide cinema.

Named after Zhang-ke’s film Platform (2000), Handling used the Chinese filmmaker’s feature as the ideal example of the kinds of titles they were searching for.

Zhang-ke responded: “When I watch, and make films, I hope they will give a good reflection of our world and society - offering a different film language to encourage new cinema.”

Denis, whose films have screened at the festival since her 1988 debut Chocolat, said she was honoured to be a part of the jury, likening the selection of films to her own.

“I am passionate about films that don’t just represent the ideals of life, but that take you to a higher place emotionally. Something like Jean Luc Godard’s Le Petit Soldat. It spoke to me.”

Holland, whose widely varied body of work that stems from Poland and Czech Republic, agreed, adding she is looking for “different sensibilities and approach, something she she might even learn from and take back for herself.”

Handling dismissed the idea of a tie, encouraging the panel to focus on one key winner.

“It is painful there is only one prize,” Zhang-ke laughed. “But it’s a great way to encourage young directors.”

Denis jokingly added: “As long as we can find a place to smoke and drink, we will find a way to make a decision.”

Different to other sections, its first screening will be for public, press and industry.