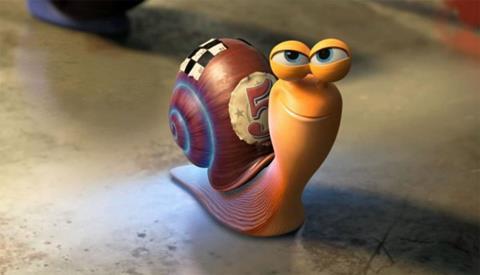 An animated family film centering around a snail magically gifted with super-speed, Turbo is marked by a rather bewildering chasm between its area of chosen focus and other, more exciting possibilities its conceit suggests. Imagine a superhero movie where Peter Parker just took up high school sports, Superman the Olympic shot-put, or Hal Jordan metalworking and fabrication. In a nutshell that’s Turbo, an inoffensively affable but unmemorable offering that showcases a bit of wily imagination but quickly ducks back into its shell, opting for a safe, all-too-familiar athletic story of underdog triumph.

Turbo works on a diversionary level, if mostly just for younger audiences. The animation is bright and agreeable, with a color palette that favors stylized mollusks set against a highly detailed and more realistic human world.

With The Croods ($578 million worldwide) and Epic ($236 million worldwide), distributor 20th Century Fox already has two animated hits this year that have rung up $100 million apiece in domestic receipts, and Turbo seems a sure bet to make it a third. The movie’s catchy, simple marketing campaign (“He’s fast, they’re furious”) sells its concept in canny fashion and attaches itself to another popular franchise to boot, further boosting its overseas commercial prospects. Ancillary value will be additionally buoyed by a special Netflix TV series, Turbo: F.A.S.T., airing in December.

Theo (Ryan Reynolds), self-christened Turbo, is a garden snail out of pace with his brethren. He idolises human racecar driver Guy Gagne (Bill Hader), and is given to fanciful reveries that exasperate his more grounded brother Chet (Paul Giamatti), who helps oversee the snails’ methodical harvest of tomatoes which keeps their community fed. When a freak accident wherein he gets sucked into the nitrous oxide-booster of a drag racer leaves him with super-speed, though, Turbo’s wish actually comes true: suddenly he can speed around as fast as any car.

Turbo is discovered by Tito Lopez (Michael Peña), a taco truck driver and fellow inveterate dreamer who owns a foundering restaurant with his brother Angelo (Luis Guzmán). After a rocky introduction to Whiplash (Samuel L. Jackson) and some snails Turbo makes nice, and Tito discovers his gift. Partnering with the other small business owners (Ken Jeong, Richard Jenkins, Michelle Rodriguez) in their struggling Van Nuys, California, strip mall, Tito takes Turbo on a road trip, to enter him in the famous Indianapolis 500 and let him race against Guy and other human drivers.

With ease and aplomb, Turbo taps into feelings of underdog uplift (“No dream is too big, and no dreamer too small”). Unaddressed questions abound, though (how, prior to a human makeover, did Turbo get painted decals on his shell?), indicating a certain shrugging, slapdash laziness with the concept, or perhaps the result of unmerged draft revisions (director David Soren, Darren Lemke and Robert Siegel share screenplay credit).

Unwilling or unable to exploit for potential comedic effect any gaps in understanding between its snail and human characters (the latter address the former, though they’re never able to hear them speak), Turbo tries somewhat awkwardly to thread the needle between blithe acceptance and astonished celebration of its main character’s gifts; no one ever seems to ask how or why. The result is an unconvincing tone.

Furthermore, Whiplash and the rest of his undersketched crew (a group whose voice cast includes Snoop Dogg and Maya Rudolph) somewhat embarrassingly lean on a self-consciously “urban” patois, with no attendant explanation of any difference in upbringing or neighborhood. It’s an arbitrary character decision, but the fact that the movie never addresses this, along with any number of other story choices, is reflective of its lack of depth.

In spite of all this, Turbo works on a diversionary level, if mostly just for younger audiences. The animation is bright and agreeable, with a color palette that favors stylized mollusks set against a highly detailed and more realistic human world. Several forced-perspective fantasy sequences vividly showcase Turbo’s inner life, and if composer Henry Jackman’s score doesn’t quite match the lively, creative heights he touched with his work on Wreck-It-Ralph, it does hit all the proper keys of aural stimulation, especially in the movie’s energetic race sequences.

Reynolds’ low-toned vocal performance taps into the wistful yearning of Turbo, and has a nice contrast to the nervous, play-it-straight pitch of Giamatti’s entreaties as Chet. Peña, though, as the bumbling but endearingly bighearted Tito, slyly steals the show.

Screenplay: David Soren and Darren Lemke and Robert Siegel, based on a story by David Soren (with additional screenplay material by Nicholas Stoller)