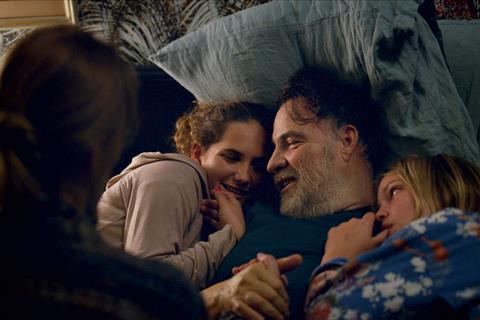 Six of the 12 features in Venice Days are directed by women for the first time in the event’s 15-year history.

They include Real Love (C’est Ca L’Amour), the second feature from French filmmaker Claire Burger, who co-directed Party Girl, which won the Camera d’Or at Cannes in 2014. Real Love is a semi-autobiographical drama starring Belgian actor and director Bouli Lanners as Mario, a man left to bring up his two turbulent teenager daughters on his own after his wife walks out on the family. Indie Sales has international rights.

Joy is the second narrative feature from Austrian director Sudabeh Mortezai following the award-winning Macondo in 2015. Set in Vienna, the new film is about Nigerian woman trying to make a new life for herself and her daughter. Films Boutique has sales rights.

Domingo, co-directed by Brazilian filmmakers Clara Linhart and Fellipe Barbosa, is an ensemble drama that follows different members of an upper-class family on the momentous day of President Lula’s inauguration in 2003.

The Three Adventures Of Brooke is a debut film from China’s Qing Yuan. It is a road trip of sorts about a young poet who goes on a trip with the ex-wife of an elder classmate.

Nicole Palo’s comedy Emma Peteers will close Venice Days. It explores issues surrounding mental health with a story about a woman contemplating suicide who strikes a strange complicity with a funeral director. It is the second feature from the Belgian director following Get Born in 2008.

Cambodian director Rithy Panh’s Graves Without A Name, a documentary exploring the ongoing horrific legacy of the Khmer Rouge, will open Venice Days on August 29.

Further highlights include Joachim Lafosse’s Keep Going, an adaptation of a novel by Laurent Mauvignier about a mother and son who trek across Kyrgyzstan on horseback. Virginie Efira and Kacey Mottet-Klein star.

Venice Days is also showcasing the world premiere of Screwdriver by Palestinian director Bassam Jarbawi. Shot entirely on the West Bank with a mostly Palestinian crew, the film is about a political prisoner who returns home but doubts he is the hero others want him to be.

IN COMPETITION (all world premieres)