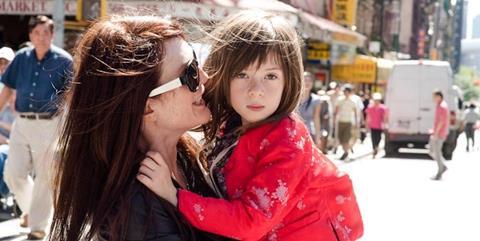 A heartbreakingly perceptive illustration of the axiom that when parents get divorced, the ones most affected are the children, What Maisie Knew is a closely observed and deeply emotional drama in which a kind-hearted six-year-old girl only slowly begins to understand the complexity of her mother and father’s dysfunctional relationship. Guided by a superb cast — and a strong turn from newcomer Onata Aprile — the latest from directors Scott McGehee and David Siegel (The Deep End, Bee Season) wrings tears but does so with a great deal of tenderness and intelligence.

All four adult actors have been given layered characters to play, and it’s to the filmmakers’ credit that none of them are easy to peg — at different times in the film, we like or dislike each of them, even though their reasons are easily understandable.

What Maisie Knew shouldn’t have much problem finding a distributor, thanks in part to its stars (including Julianne Moore), although strong reviews should also benefit the cause. This drama ought to cater to adult audiences who will appreciate the film’s smartly handled examination of divorce and a young child’s reluctant coming-of-age.

Working from a screenplay by Nancy Doyne and Carroll Cartwright that’s based on the Henry James novel, the film introduces us to Maisie (Aprile), a sweet-tempered girl whose parents — rock singer Susanna (Moore) and art dealer Beale (Steve Coogan) — are about to split up. Quickly, the custody battle over Maisie becomes contentious, and the rancour only escalates when Beale marries their former nanny (Joanna Vanderham) and Susanna in retaliation ties the knot with a dashing young bartender (Alexander Skarsgård). Maisie’s loving nature is tested by the emotional warfare going on between her estranged parents, but at the same time it’s nurtured by their new partners, who are sympathetic to the girl’s delicate position in the middle of all this bickering.

The film works in subtle ways to examine how Maisie reconciles her parents’ fractious relationship — she’s old enough to pick up on their animosity but still too young to fully understand what’s going on. McGehee and Siegel have elicited a deftly understated performance out of Aprile, and the newcomer is wondrous at hinting at Maisie’s quiet thought process as new adults come into her life, all of them wanting to help her through this difficult transition.

Maisie is perhaps too remarkably well-adjusted — her parents don’t know how lucky they are — but the audience watches the grownups’ actions through her innocent perspective, noting that how they pretend to behave around her doesn’t always square with their true actions. (Though neither parent is portrayed as a villain, Susanna’s failings are in some ways the more irksome, her deep love for her daughter laced with a dark possessiveness that can be turned back on Maisie like a weapon.)

All four adult actors have been given layered characters to play, and it’s to the filmmakers’ credit that none of them are easy to peg — at different times in the film, we like or dislike each of them, even though their reasons are easily understandable. Susanna is a prototypical Moore creation, the sort of iron-willed but also badly damaged woman who, in lesser hands, could be shrill but is instead worthy of empathy, despite her bottomless self-centredness. But Beale is her equal in this regard, and Coogan makes good use of his oily charm to portray a man who Maisie can’t help but love. Playing the couple’s rebound lovers, Skarsgård and Vanderham have tricky roles as well, but they develop new dimensions as we learn more about them — they’re hardly saints, but like Maisie, they too are in some ways victims of the furious storm generated by Susanna and Beale’s separation.

Screenplay: Nancy Doyne & Carroll Cartwright, based on the novel by Henry James