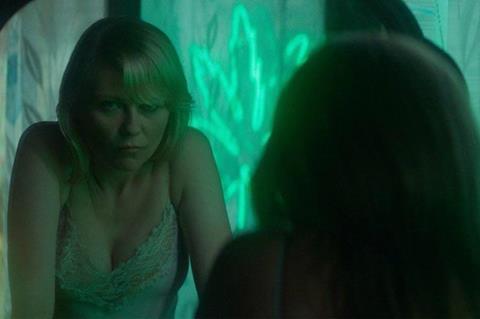 Apparently the word refers to an actual traumatic state caused by getting lost in a forest. However, if the title Woodshock leads you to expect a horror movie about the results of bad acid at a 60s music festival, you’re not that far off in terms of the sheer disorientation induced by watching this unfocused headtrip of a psychological thriller.

Woodshock simply seems reluctant to commit itself to mere coherence, as if that simply were too unchic

This is the film-making debut of Kate and Laura Mulleavy, fashion designers and creators of the Rodarte label, who previously made their mark in film with their costume work on Darren Aronofsky’s Black Swan (they have a costume credit here too, alongside Christie Wittenborn). Woodshock might gain some commercial traction from Kirsten Dunst’s presence as the psychically unravelling protagonist, but otherwise it’s an ill-fitting, awkwardly stitched confection that looks likely to go back among the mothballs after its Venice festival airing in the sidebar Cinema Nel Giardino section.

The film was shot partly among the redwood forests of Humboldt County, and it’s in one such locale that we first spot Theresa (Dunst), a woman remembering an anxious experience of getting lost there (or perhaps it’s a dream, the Mulleavys usually preferring to keep us in the dark about what is and isn’t strictly happening). Early on, we see Theresa providing the laced joint that helps in the assisted death of her ill mother (Susan Traylor, who uncannily looks the part of Dunst’s parent). Theresa works in a small town marijuana depository alongside loose cannon Keith (Pilou Asbaek), which means she has access to the requisite lethal liquid, as well as to LSD or some other psychotropic drug with which she laces her own joints.

Meanwhile, Theresa is having a fraught relationship with sawmill worker boyfriend Nick (Joe Cole), while Keith hangs out at the local bar (where the jukebox is stocked with 70s/80s hipster classics by Television, Suicide et al) and playing cards with a boy named Johnny (Jack Kilmer). At some point, Johnny is abruptly, inexplicably declared dead, possibly because of a mix-up on the part of the increasingly addled Theresa.

There’s a thin, and very jagged, line between the radical mosaic approach to editing and narrative of a film like Shane Carruth’s Upstream Color and the impressionistic jigsaw vagueness of Woodshock, which simply seems reluctant to commit itself to mere coherence, as if that simply were too unchic. The film functions less as story than as visual tone poem, splicing together brief, often seemingly disconnected shots into a texture of moments of feeling rather than incident, and providing scant dialogue by way of signposts. In a single sequence, a character will jump from one location to another, or elements of décor change without explanation (as when a previously clear bath is suddenly seen laced with petals).

There’s much superimposition and decorative play with light, making Woodshock resemble a pastiche of retro experimental film styles, or an assemblage of vintage 60s album covers.

Dunst floats impassively dazed through much of the action, sometimes shooting inscrutable gazes straight to camera - except when she’s required to go into histrionic overdrive, as a generally unrestrained Asbaek often does too. Occasional hallucinatory images have, at their best, a music video polish (if you’ve ever wanted to see Dunst levitate, you’ll be in clover). But the Mulleavys’ use of abrupt juxtaposition can at times tip over into banality - like the cut from a culminating storm of full-on violence to a pair of budgerigars sitting motionless and indifferent in their cage. Maybe they’re just as out of it by this point as the rest of us.