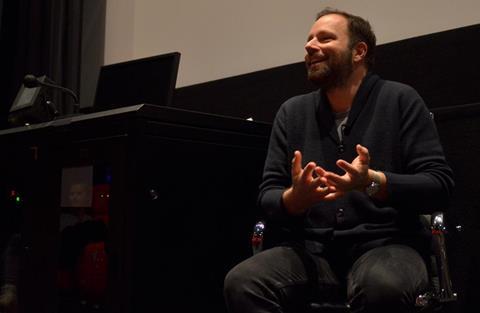 In conversation with National Film and Television School (NFTS) head of screen arts Sandra Hebron, formerly head of festivals and artistic director at the BFI London Film Festival, Lanthimos discussed the creative collaborations behind the film.

The Lobster, starring Colin Farrell and Rachel Weisz, is Lanthimos’ fourth feature and his first in English. The director talked about the transition from his lower budget features, including the Oscar-nominated Dogtooth.

“It was great doing those films in Greece, but they were made with a lot of favours,” he recalled. “I was used to borrowing every small detail – friend’s cars, houses, clothes even. I like restrictions, because in some way they drive you creatively – when you don’t have so many choices it’s kind of liberating.  On Dogtooth there was just one camera lens that worked, so that saved a lot of discussion time.”

Lanthimos enjoyed the continuity of working with some of the actors and crew, including editor and cinematographer, from his previous films on The Lobster.

“It was very different to shoot in an environment that was much more structured than how I worked in Greece, so it really helped having those people I already had a shorthand way of working with,” said the director.

He described how he likes to trust his editor, Yorgos Mavropsaridis who has cut all Lanthimos’s films, to do the first assembly because he understands Lanthimos’s work so well and was equally delighted to have the chance to develop new creative relationships.

“Rachel (Weisz) and I had wanted to work together for a while, I was lucky enough that she liked my previous films. All the actors who came on board were the ones who really wanted to do it – they really got the film from the beginning and were very supportive.” Lanthimos said.

He explained how he and long term co-writer Efthimis Filippou developed the story.  “We start from fragments of ideas – ‘What if people had to go to a hotel if they became single?’, then we build up the whole world around it, the structure, conflicts, and the story comes from there.”

Asked about how he pitched the film Lanthimos recalled: “It wasn’t easy. I kept trying to convince people it was very accessible – it’s actually a love story and a prison drama with a very conventional plot-line.”

He advised students: “If you’re trying to do something different, it really helps to have a conventional narrative underneath, even though at the same time hopefully you’re making something original.”

Lanthimos said he was clear from the outset that he wanted to leave some things for the audience to decide. “The film asks questions there are no answers to, ‘If you find true love what would you be prepared to do for it?’, you need to answer those questions yourself, or at least to keep asking those questions.”

Asked how he preserves his distinctive style the director said: “If you have a voice and like certain things, I find it impossible for your films not to have a certain consistency, even when you’re making a different film in a different language.  If you’re true to what you like that has a way of creeping into your work.”

On creating the unusual performances with his actors in The Lobster, he said he tries to avoid describing intellectually how a character would or wouldn’t behave.  Instead he works to make actors feel safe and free to experiment.

Lanthimos credits his experience of working in theatre in Greece with helping him learn how to do that.  “You try things out and see what feels right.  The screenplay itself has a voice.  Hopefully whatever is not right sounds wrong, so you keep on trying, it’s very instinctive, but you have to know your material to know what sounds right and wrong.” he explained.

“Though,” he added, “I had a message from Colin [Farrell] the other day saying the best direction I ever gave him was ‘Colin, I’ve been watching the footage, you’re too fat, stop eating.’ - he liked that.

“That’s the secret, finding great people to work with who have a sense of humour.”