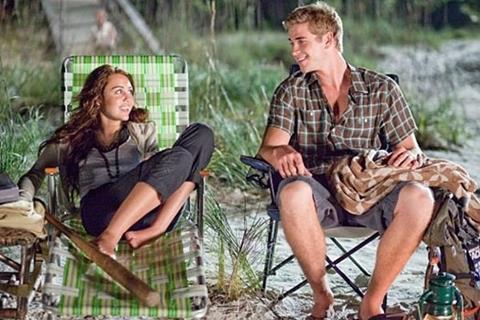 Teen sensation Miley Cyrus’s bid for film stardom outside of her Hannah Montana persona gets off to a rocky start with The Last Song. Based on a book by Nicholas Sparks, who also authored The Notebook and Dear John, this predictable relationship drama has too many false and forced emotional moments to resonate.

Cyrus exhibited a girlish sweetness in Hannah Montana, but she’s badly out of her depth when trying to bring complexity to Ronnie’s adolescent angst.

Opening domestically today (March 31), The Last Song represents Disney’s counter-programming move against the Warner Bros. action epic Clash Of The Titans. The challenge for Cyrus will be whether the young-family audiences who supported her previous two films based on the popular Hannah Montana television character will accept her in a different, more grownup role.

New York teenager Ronnie (Cyrus) is staying with her divorced father (Greg Kinnear) in Georgia for the summer, which angers her since she blames him for her parents’ divorce. But her glum mood brightens after she falls for local heartthrob Will (Liam Hemsworth) – although family secrets could drive them apart.

In her feature debut, television director Julie Anne Robinson lacks a strong grip over the highly melodramatic source material. Ronnie’s contentious relationship with her father and her tempestuous romance with Will form the centre of The Last Song, which results in several manipulative plot twists that have less to do with recognizable character development than they do with provoking cheap emotional responses from the audience at regular intervals, particularly in a protracted tear-jerking finale.

Cyrus exhibited a girlish sweetness in Hannah Montana, but she’s badly out of her depth when trying to bring complexity to Ronnie’s adolescent angst. Neither she nor Hemsworth convince as a couple going through the first flush of new love. Kinnear’s likable presence helps some, but he’s straightjacketed playing an angelic one-note character meant to teach Ronnie important life lessons.