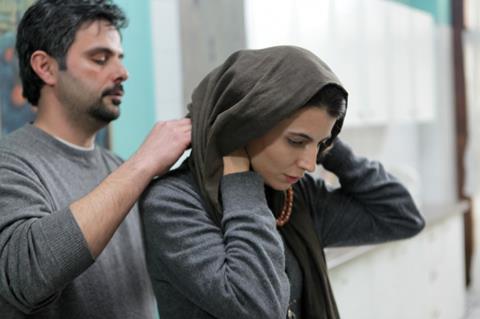 A tortuous labyrinth of a film, The Last Step (Peleh akhar) is apparently devised by writer-director Ali Mosaffa, who also plays one of the leads, to turn a basically romantic triangle into more of a reflection on the deeper meaning of art versus reality.

There are observations about cinema and reality overstepping each other, about urban landscape changing shape and about villagers abandoning the land of their forefathers to move into town.

But as it nervously moves back and forth between past and present, real and imaginary, truth and lies, relying extensively conversations that are not always subtitled into English, the complexity of his film risks putting off many viewers who may lose at a certain point all interest to untangle the plot.

Not to mention that it is difficult to understand the necessity of twisting his scheme out of shape. The film had its premiere at the Karlovy Vary International Film Festival.

It all starts with Leili (Leila Hatami) facing the camera, dressed like a woman in mourning, trying to tell someone she can’t even recall his face and bursting into laughter every time the she does it. Then her husband, Koshrow (played by director Mosaffa), who turns out to be already dead (shades of Sunset Boulevard), starts spinning out his version of the plot, while he is shown on screen riding his skateboard down a dangerously steep street.

For the rest of the film, we follow this uneasy couple back and forth in time, learning that Leili is a movie actress and that her hysterical bursts of uncalled mirth take place in front of the camera and are ruining a scene she is supposed to play in the film being shot inside the film.

Then, in comes Amin (Alireza Aghakhani), a doctor who had been living for the last 20 years in Germany, but has returned home to open his own practice and attend to his bed-ridden mother who is obsessed with the fear of contracting Alzheimer’s disease. The truth about the relations between this trio is gradually revealed, step-by-step - some details often contradicting others - to indicate truth is not always that simple or evident, while the inner monologue each one of the three entertains on the soundtrack, mange to confuse matters even farther.

To put it in simpler terms, Koshrow is devastated by his beloved wife’s restlessness and her refusal to bear him any children, while Leili is evidently nursing the pain of a long lost love. Amin, their lifelong friend, despite being a respected physician, auditions for a part in the film Leili is acting in, just to be closer to her.

Sneaked in between the lines, there are observations about cinema and reality overstepping each other, about urban landscape changing shape and about villagers abandoning the land of their forefathers to move into town.

Plus, in case one needs references, the plot is broadly inspired by Tolstoy’s Death of Ivan Ilitch; the end of James Joyce’s The Dead is easy to identify and one of the characters is called Asghari, possibly as a tribute to director Asghar Farhadi, who had both Hatami and her real-life husband Mosaffa acting in his award-winning A Separation.

Exceedingly talkative, Mosaffa’s film features fine performances from all his leads (he is no mean actor, himself), but his over- sophisticated abundance of double meanings combined with numerous artistic tributes is more often than not, simply unnecessary. When the film final sequence discloses Koshrow’s real end, one begins to suspect Mosaffa’s original intention was to make a thriller before he lost his way inside his own plot.