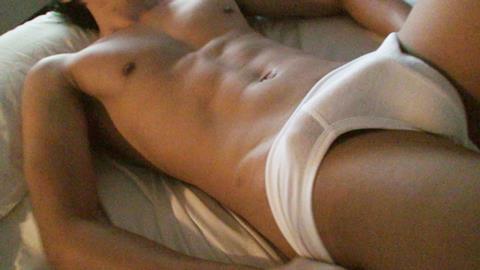 Few films are quite as upfront in stating their position as Thai docu-essay The Terrorists  (Poo Kor Karn Rai), which begins with the declaration, “We curse those who are behind the slaughter…” – i.e. the present Thai authorities that presided over the suppression of anti-government demonstrators in Bangkok last year.

However erratic his film, Thunska can certainly be commended for making an impassioned statement.

Given that initial forthrightness, however, Thunska Pansittivorakul’s film emerges as an amorphous hybrid – part agit-prop documentary, part experimental piece that could at times be gallery video art, all liberally laced with pin-up style homoerotica. Gay, human rights and experimental fests will be intrigued, but commercial potential is nil.

Sometimes very roughly shot in DV, the film begins with intertitles condemning the government of Prime Minister Abhisit, before quoting historian Walter Laqueur to the effect that “One man’s terrorist is another man’s freedom fighter.”

A memorable sequence features a man taking photos in a huge aquarium: images of fish run through the film, possibly explained by the passing comment, made later by a Bangkok citizen pleading for the government to respect its citizens, that “People’s lives are different from the lives of fish.” A man’s voice – possibly Thuska’s, or voicing the director’s autobiographical text - talks about his own difficult history as a Thai citizen.

In the film’s most confrontational juxtaposition, Thunska shows disturbing archive photos of police brutality in the 1970s, set to a sentimental Thai ballad rebuking a “deceitful guy” – presumably to be read as an anti-love letter to the government.

The film is very hit-and-miss until its final stages, which offer more direct documentary coverage of events in Bangkok, notably at a demo outside the city’s UN headquarters. It’s in these sequences that the film achieves a potent effect of direct reportage that leaves what precedes looking that bit more nebulous.

But, however erratic his film, Thunska can certainly be commended for making an impassioned statement and one that, given the situation in his country, represents a substantial personal risk on the film-maker’s part.