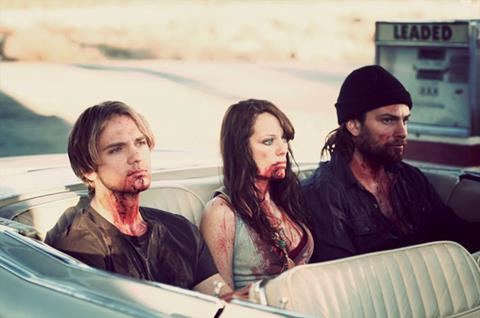 Mitchell Altieri and Phil Flores, who direct in collaboration as ‘The Butcher Brothers’, are subtler filmmakers than their nom de guerre suggests, though not averse to extremes of gore and peculiarity – and their oeuvre is distinguished by a fondness for dysfunctional family relationships and twisted, ingenious plotting.

The Hamilton siblings are interestingly shaded and varied, though all monsters, and the development of the characters over the films suggests that further installments might be workable.

Since their breakthrough third film, The Hamiltons (2006), they have made one of the more interesting remakes of the do-it-again cycle (April Fools Day) and the bikers-vs-ghosts quickie The Violent Kind.  The Thompsons is a sequel to The Hamiltons, though an opening narration by vampire Francis (Cory Knauf) brings audiences who didn’t see the earlier film up to speed and the picture expands on its predecessor in an unusual way.  The Hamiltons was a claustrophobic tale about siblings trying to fit into suburbia while coping with their varying urges to kill, and only revealed that they were a family of vampires halfway through.

In The Thompsons, the family has changed its name, and taken to the road in sequences set in Texas and Paris before the bulk of the story brings Francis to rural England in search of others of his kind, which leads to a hook-up with the more confident, callous and well-established vampire clan, the Stuarts, led by a publican patriarch (Daniel O’Meara) and his wife (Selina Giles).

Complications involve the Stuarts’ human-born daughter (Elizabeth Henstridge) and murderous twin sons (Sean Browne and Tom Holloway), who like to torment victims by duetting on ‘My Old Man Said Follow the Van’ while dazzling them with Twilight-ish bursts of super-speed, and eventually bring in Francis’s twin siblings, David (Samuel Child) and Darkene (Mackenzie Firgens), plus injured younger brother Lenny (Ryan Hartwig), whose role has changed radically since the first film.

The Hamiltons was about vampires trying to fit in with normality while still living as predators, but The Thompsons is about family ties, pecking orders and dynastic ambitions within the extended Hamilton-Stuart clan.  There are action and horror scenes, with a side order of peculiar sensuality, but the film resonates because of the odd, unusual characterisations.

The Hamilton siblings are interestingly shaded and varied, though all monsters, and the development of the characters over the films suggests that further installments might be workable.  The Butcher Brothers show admirable loyalty in maintaining an acting repertory company; Knauf, one of the many returning cast members, also contributes to the screenplay here.