Screen International was lunched at a time the industry was on the verge of great change, one being shaped by summer tentpoles and the seeds of modern co-production. Screen takes a look at the state of international film in 1975. 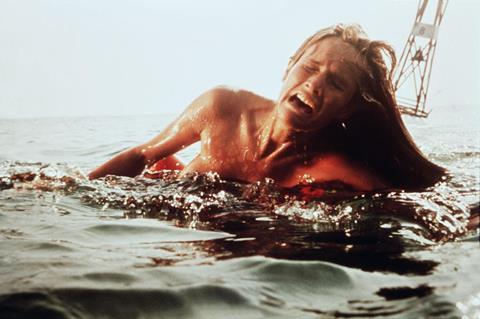 In the US, it was the year of the shark. In the UK, the industry was still in deep water. And elsewhere in the world, new film-making waves were gathering momentum.

The UK film industry entered 1975 in a precarious state, plagued by declining audiences and a lack of overseas investment. “It mirrors a nation in the middle of a nervous breakdown,” director Lindsay Anderson suggested to CinemaTV Today - Screen International’s precursor - as the year began.

Total UK box office for 1975 dropped to an all-time low of £125m (around $290m at the time), and in Screen’s annual chart of the top 20 earners, US disaster movie The Towering Inferno and horror sensation The Exorcist came in first and second respectively.

The production sector worked on only 46 features during the year; 20 fewer than it had handled in 1974

On the UK industry’s shop floor, projects including The Man Who Would Be King, Lisztomania, The Man Who Fell To Earth, Bugsy Malone and The Omen all went into production, with EMI and ITC ranking as the most active UK producers and Warner Bros, Columbia and Universal leading among the Hollywood studios.

But overall the production sector worked on only 46 features - representing a modest investment of £30m ($70m) - during the year; 20 fewer than it had handled in 1974. And the slump threatened the country’s film-making infrastructure, forcing EMI Elstree Studios to become a ‘four-wall’ facility, hiring out soundstages to producers with their own freelance staff.

The year did, however, produce a few hopeful signs for UK film-makers.

Venerable production and distribution banner British Lion Films, once the domain of Alexander Korda and, more recently, the maker of The Man Who Fell To Earth and owner of Shepperton Studios, was bought out by managing directors Michael Deeley and Barry Spikings (future producers of The Deer Hunter), who expressed their ambitions by setting up a production base in Hollywood.

Cigar-chomping impresario Lew Grade made a splash when his Associated TV launched a film-funding partnership with US exhibitor General Cinema Corp, with plans to make 15 to 20 features a year — among them 1976 hit The Eagle Has Landed. “By the time I’m 70,” predicted the then-68 Grade, “British pictures will rule the world.”

And EMI, boosted by the success of Murder On The Orient Express and run by “the most powerful man in the British film industry” Nat Cohen, announced a £6m ($14m) film slate including Evil Under The Sun (another Christie adaptation), Aces High and The Likely Lads.

Perhaps the most promising sign for UK film was the setting up by Labour prime minister Harold Wilson of a government working party, headed by National Film Finance Corporation managing director John Terry, to consider “the requirements of a viable and prosperous British film industry over the next decade”.

The working party - whose membership also included film-maker Richard Attenborough, future BBC director general Alasdair Milne and film and TV union head Alan Sapper - would eventually propose the establishment of a new state film authority and a new film fund with £10m ($23.3m) to put into UK production. (Wilson’s fall from power in 1976 did, however, stop the proposals from being implemented in their original form.)

Compared with the UK, the US film industry was in great shape in 1975.

This box-office boost was mostly attributable to Jaws, the shark thriller adapted from Peter Benchley’s best-selling novel, that almost overnight turned Steven Spielberg from a promising new director into a household name.

With an eventual North American gross of $260m - gleaned from release on a then-unprecedented 950 screens - Jaws chomped its way to the top of the year’s box-office chart and initiated the still-current industry practice of wide summer openings backed by huge advertising campaigns.

Behind Hollywood’s glamorous facade, the US majors were learning how to make more money with fewer films

Behind Hollywood’s glamorous facade, the US majors were learning how to make more money with fewer films.

Between them, the studio members of the Motion Picture Association of America (MPAA) distributed an all-time low of 146 films during the year and reported declining production levels.

Universal Pictures, for one, seemed to benefit from the strategy, achieving record worldwide rentals of $289m, with Jaws alone (which eventually grossed $210.7m internationally) accounting for rentals of $104m from the US and $132m from the rest of the world. As a group, the majors saw international rentals for the year leap 27% to $285m.

The US industry’s challenges in 1975 included a growing piracy threat - MPAA president Jack Valenti proposed a new organisation to battle what he said was already a $50m-a-year problem - and an attempt by the US Congress to kill tax shelters that were being used to provide production incentives. And the possibility of a labour strike was only averted when the IATSE film and TV workers union signed a new agreement with the studios, which called for substantial pay hikes over the next four years.

In the industry’s executive suites, meanwhile, changes were afoot that pointed to a new era; one in which Hollywood’s balance of power would shift towards independent producers and agents.

Among the industry players involved in a series of studio shake-ups were Robert Evans, who resigned as Paramount’s head of production after turning the studio around and producing Chinatown, and Peter Guber, who left his job as executive vice-president of worldwide production at Columbia to become an independent producer, with subsequent credits including Midnight Express, Rain Man and Batman.

Beyond the Anglo-American axis, the rest of the film industry was slowly becoming more international and, in some hotspots at least, more globally significant.

At Berlin, the Golden Bear went to Adoption (Orokbefogadas), from Hungary’s Marta Meszaros. Woody Allen, whose Love And Death screened in competition, won a Silver Bear for his body of work.

Over the rest of the year, 222 projects went into production in France, slightly down from the previous year’s record level, but few lived up to the promise shown by the Nouvelle Vague a decade earlier.

In Germany, by contrast, a new agreement that called for broadcasters to invest in features but delay screening them on TV for two years helped foster the New German Cinema movement.

Although only 80 German films were produced over the year, the output included such notable works as Rainer Werner Fassbinder’s Fox And His Friends, Wim Wenders’ Wrong Move and Volker Schlöndorff’s The Lost Honour Of Katharina Blum. The health of the local industry also prompted Universal Pictures owner MCA to buy 50% of German chain Olympic Theatres Circuit for $10m.

In Australia, Peter Weir’s period mystery Picnic At Hanging Rock made its debut, becoming a key work in the Australian film renaissance that also spurred the establishment of the Australian Film Commission, a government agency designed to invest in production and promote the country’s growing industry.

And in India, the government - which three years earlier had cancelled the import licences of the US studios - reached a new agreement with the MPAA that allowed for the resumption of Hollywood exports.

In Japan, meanwhile, 1975 saw Sony - future owner of Columbia Pictures - launch Betamax, the first home-video system, which was introduced into the US later that year as a console combining a video recorder and a 19-inch colour TV monitor.

Though Betamax would eventually lose the video-format war to the rival VHS system, its launch marked the birth of a new ancillary market that would fuel the growth of the global film industry well into the 1990s and beyond.