A Night in the Woods 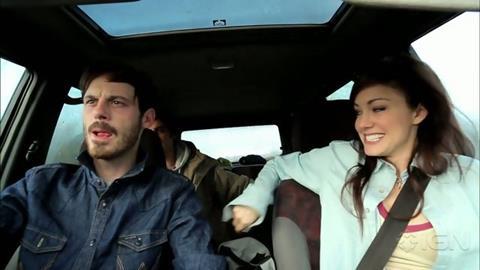 This entry in the ‘found footage’ horror cycle knowingly plays variations on The Blair Witch Project.  Again, two guys and a girl venture into haunted woods, toting video equipment, and ambiguously lose their way, turning on each other as they are perhaps pestered by external forces.  As a Blair Witch-style caption, similar to the one used in Troll Hunter, confirms – these people remain missing, and their fate is unconfirmed.

It does have its effective scares and pointed moments of human cruelty.

However, the familiar ingredients are scrambled in a different way, most notably in the use of a British setting (Dartmoor and nearby woodland) and the way that the local legend of ‘the Huntsman’ is mostly set aside while the unease comes from interactions within the central trio.

It also makes the compulsion to film everything as much a source of the horror as a necessary plot convenience, with some of the most memorable moments hinging on the audience’s realisation that whoever is holding the camera has decided to record someone else’s crisis rather than help them. The film premiered at last year’s Fright Fest genre festival in the UK.

British Kerry Hastings (Anna Skellern) is in a relatio nship with American Brody Cartwright (Scoot McNairy, of Monsters) but already exasperated with his tendency to film their every waking (and some of her sleeping) moment, even as she doesn’t realise it extends to setting up spy-cameras as well as more obvious surveillance.  The couple go camping on Dartmoor, revisiting a spot Brody has been before, hooking up with Leo (Andrew Hawley), whom Kerry claims is her cousin but who is actually a former boyfriend.

After visiting a pub, where locals tell tales of ‘the Huntsman’, the trio yomp through picturesque scenery and set up camp.  Friction arises between all three, and elements of their backstories emerge, sometimes in snippets of Brody’s older films, sometimes in dialogue revelations.  Kerry is eventually harried in the dark, but doesn’t know which of her cracked love interests is responsible.  The last act perhaps shades a little too much into incomprehensibility, and the convention of an unhappy ending works against audience involvement in the plight of the sympathetic Kerry.

Director Richard Parry, credited also as screenwriter though he admits most of the dialogue is improvised, is a documentarian and war correspondent, making a second feature a decade on from his post-millennial London drama South West 9.  It may be that A Night in the Woods, like the Spanish Atrocious (another FrightFest selection), comes along a little too late in its cycle to click with audiences in the way that Blair Witch did in 1999 or the Paranormal Activity films have managed more recently.

It does have its effective scares and pointed moments of human cruelty (Brody filming through the curtains and pretending not to be out as a locked-out Kerry struggles with heavy shopping bags is one of the more memorable nastinesses) and is remarkably well-acted by all three leads.