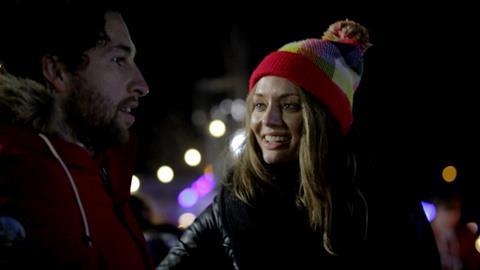 A low-budget but gently entertaining romantic comedy charmer, Jamie Adams’s A Wonderful Christmas Time is almost a Welsh mumblecore (except there isn’t too much mumbling) thanks to its unassuming improv style and twentysomething sensibility. Following on from his film Benny & Jolene, it marks out Adams as savvy talent able to bring out the best in his talented cast.

A Wonderful Christmas Time is a genial and gently warm-hearted little film – low budget to be sure, but made with a whole lot of heart.

The film, which has had a smattering of screenings in the UK prior to a VOD platform, is worth checking out. Its tale of stuttering and stumbling love may well be a familiar one, but this Porthcawl set film is genuinely engaging and watchable, thanks to a large degree to the innate charm of lead actress Laura Haddock (who starred in The Inbetweeners and recent genre film Storage 24).

When her Cherie meets gloomy – and in therapy – Noel (Dylan Edwards) at the edge of a cliff (where he is trying a little scream therapy) things seem very familiar plot-wise. He has recently been dumped by his girlfriend while she is a disillusioned actress who has returned home to reflect on her past and maybe begin a more fulfilled life. Through luck and circumstance they end up on a boozy ‘double date’ with his pal Steve (Ian Smith) and her friend Mandi (an impressive Mandeep Dhillon), but she doesn’t to be the rebound girlfriend.

Rather engagingly she proposes setting him up on a series of dates (well, three) that are designed to fail. She shadows him, and when it is clear he is ‘dated’ enough they begin a tentative and affectionate romance. The Christmas and New Year backdrop add extra frisson to the proceedings as romance and misunderstandings abound before a stumbling block in the form of the arrival of Cherie’s former boyfriend.

The film was shot over a five-day period with the cast improvising from a scene-by-scene outline, and while it does have its clichéd moments (and what rom-com doesn’t?) it also feels fresh and honest, with the central relationship between Laura Haddock and Dylan Edwards especially tender and sparky. A Wonderful Christmas Time is a genial and gently warm-hearted little film – low budget to be sure, but made with a whole lot of heart.