Wallace & Gromit: The Curse Of The Were-Rabbit 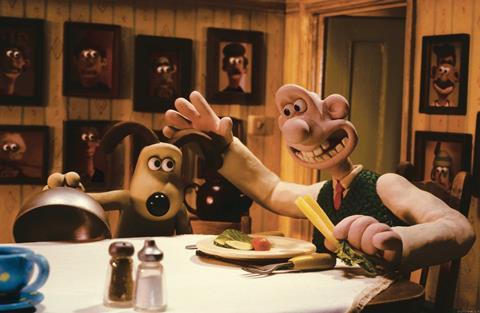 A delirious blend ofwhimsy and wit, the long-awaited Wallace & Gromit feature is sure to charm all who encounter it. Having already opened in Australia - just ahead of its Toronto appearance - to substantially better figures than those for Aardman’s previous feature, the buoyant Chicken Run, it is a feature that will hoover up family audiences worldwide in the coming months.

Good clean fun from beginning to end, Curse Of The Were-Rabbit will appeal to parents seeking a gentle new companion for their children, and will reward repeat viewing with its many, many punning details and visual and aural baubles.

If the film offers no surprises, it nevertheless provides the unalloyed pleasure of seeing Aardman’s singular claymation at work, as the cheese-crazed tinkerer veers on the edge of disaster after disaster while his four-legged companion and intellectual superior wordlessly saves the day.

In the US (Oct 7), its stereotypical presentation of Little England should work well, while in the UK- where it is released on Oct 14, like the rest of Europe in time for holidays-the lead characters’ high recognition among audiences can only help.

The only question is whether the film can also entice older demographics - such as the teen crowd - andpropel it beyond Chicken Run’s $225m worldwide take (of which 53% was from international).

It will also be a strong contender for best animated features prizes come awards season, alongside the likes of Tim Burton’s Corpse Bride. Ancillary should be heady, offering the opportunity also to repackage Aardman’s extensive back catalogue.

Wallace (Sallis) and Gromitrun a pest-control service, Anti-Pesto, for the villagers of Tottington, all of them competing in a giant vegetable competition. Called upon by the dotty Lady Tottington (Bonham Carter) to solve her rabbit infestation, Wallace crosses paths with Her Ladyship’s would-be suitor, a swinish swain named Victor Quartermaine (Fiennes).

Quatermaine’s solution is to blast the rodents to smithereens with his shotgun; Wallace’s is the BunVac, a huge vacuum that sucks at 100 rpm (“rabbits per minute”) the bunnies from their burrows and collects them in a vast glass storage tank. His humane treatments set the lady swooning and Quartermaine seething; Wallace gets a new friend while making an enemy for life. He also gets stuck with another hundred hungry rabbits.

Convinced he can apply his inventor’s skill to rid the captured rabbits of their desire for vegetables, he connects himself and his newly-created brain-wave transmitter to the BunVac and attempts to impart to them his own dislike for crunchy carrots and his taste for such cheeses as “Stinking Bishop”.

But the experiment goes horribly wrong, unleashing a cotton-tailed giant upon the village’s sofa-sized courgettes and table-length carrots. Wallace thinks he has the solution, but Gromit knows better how to save the hide of his Dr Jekyll; meanwhile, Victor Quartermaine has acquired three gold bullets (24 karat, to be sure) with which to slay the unholy beast.

From the snaggle-toothed vicar defending himself against evil with a crucifix made of cucumbers to Lady Tottington’s carrot-shaped hair-do - the big bunny channels King Kong in therave-up finale - the film is a visual feast.

The dialogue is almost as good, as when her ladyship stands behind two strategically-positioned melons;or when Bonham Carter, in her poshest pout, complains that “Victor has never shown any interest in my produce.”

And any actor would kill for the expressive face and soulful eyes of Wallace’s Plasticene pooch, especially when he shares with the audience his fear for his master’s sanity.