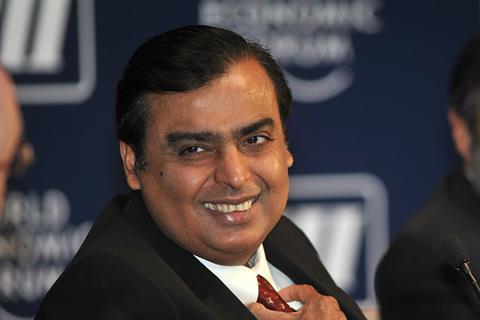 Facebook is spending $5.7bn for a 9.99% stake in Indian tycoon Mukesh Ambani’s Reliance Jio, one of the leading forces in India’s telecoms, media and entertainment sectors.

“We’re making a financial investment, and more than that, we’re committing to work together on some major projects that will open up commerce opportunities for people across India,” said Facebook co-founder and chief executive Mark Zuckerberg in a Facebook posting.

“India is home to the largest communities on Facebook and WhatsApp, and a lot of talented entrepreneurs. The country is in the middle of a major digital transformation and organizations like Jio have played a big part in getting hundreds of millions of Indian people and small businesses online.”

Jio has also become one of the biggest players in Indian content creation by acquiring stakes in Viacom18, Balaji Telefilms and a minority holding in Eros International, which recently announced a merger with STX International. It operates several streaming and digital payments services, including films and TV through JioTV and music streaming service JioSaavn.

”India is in the midst of one of the most dynamic social and economic transformations the world has ever seen, driven by the rapid adoption of digital technologies. In just the past five years, more than 560 million people in India have gained access to the internet,” said Facebook in a statement, attributed to chief revenue officer David Fischer, and Ajit Mohan, vice president and managing director, India.