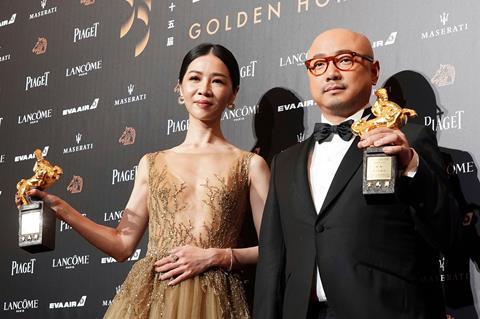 Last week, the China Film Administration banned mainland Chinese films and filmmakers from participating in the awards. Chinese state broadcaster CCTV said the move was a reaction to last year’s ceremony, when Taiwanese documentary award winner Fu Yue said on stage during her awards speech that she hoped Taiwan could one day be treated as an independent entity.

The boycott does not officially include Hong Kong films, but local press is reporting that several high-profile Hong Kong-China co-productions have been pulled from the event. Titles affected by the controversy are thought to include Universe Entertainment’s The White Storm 2 - Drug Lords, Shaw Brothers’ Line Walker 2: Invisible Spy and Mega-Vision Project Workshop’s Chasing The Dragon II: Wild Wild Bunch.

However, it’s understood that Hong Kong director Yonfan’s Venice title No 7 Cherry Lane, which is not a co-production with mainland China, has not been withdrawn from the awards. Philip Yung’s Where The Wind Blows was also mentioned by local press, but the film is still in post-production and hasn’t been submitted to the Golden Horse Awards, according to its producer, Hong Kong studio Mei Ah Entertainment.

China’s government considers Taiwan as part of its territory and has been reinforcing this line in the run-up to the country’s elections in January 2020, in which Taiwan’s pro-independence president, Tsai Ing-wen, is seeking a second term.

In June, China announced that its own film awards ceremony, the Golden Roosters, would be held in Xiamen in Fujian province on the same day as the Golden Horse Awards on November 23, effectively forcing filmmakers to choose between the two events.

First held in 1962, the Golden Horse Awards are open to all Chinese-language films, regardless of country of origin.