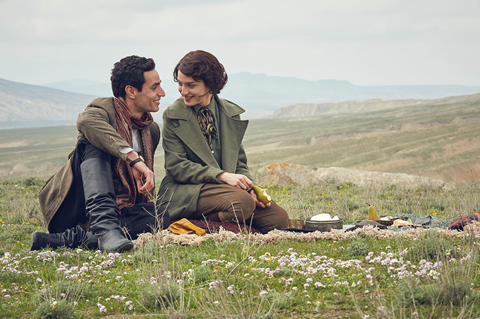 The first still for feature film adaption Ali & Nino has been released.  Currently shooting in Azerbaijan, the adaption of the global best selling novel is being directed by BAFTA-winning Asif Kapadia (The Warrior, Senna), from a screenplay by Christopher Hampton (Dangerous Liaisons, Atonement).

Since its initial publication in 1937, Kurban Said novel Ali & Nino has been translated into 33 languages worldwide with nearly 100 reprints.

Ali Khan and Nino Kipiani live in Baku, the cosmopolitan, oil-rich capital of Azerbaijan, which, at the beginning of the twentieth century, is a melting pot of different cultures. Ali is a Muslim, with his warrior ancestors’ passion for the desert; and Nino is a Christian Georgian girl with sophisticated European ways.

The two have loved each other since childhood and Ali is determined that he will marry Nino, despite their cultural differences, but there is not only the obstacle of their different religions and parental consent to overcome. The First World War breaks out and Baku’s oil becomes the focus of Russia’s vie for power.

As the war plays out and control of the Caucuses changes hands, Ali and Nino find themselves swept up in Azerbaijan’s fight for independence.