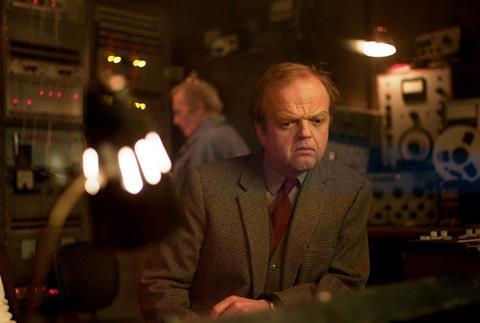 The second feature from Katalin Varga director Peter Strickland is an idiosyncratic, impeccably crafted mindbender that shifts between the beguiling and the bemusing. Playful and provocative in the way it evokes disreputable Italian giallo films from the 1970s, it should easily amuse dedicated film buffs although a general audience is more likely to conclude there is less here than meets the eye or the ear.

Berberian Sound Studio never seems entirely clear whether its principal focus is on satirising Italian filmmaking of the period or developing a creepy, unsettling horror yarn.

Further Festival exposure seems guaranteed after a world premiere screening at the Edinburgh International Film Festival but commercial prospects are less assured for what may be dubbed an ”interesting”, slightly mystifying arthouse curio.

Strickland shows an affectionate nostalgia for a world before digital as mild-mannered English sound engineer Gilderoy (Toby Jones) arrives at a shabby sound studio in Italy to work on a gruesome delight by the name of The Equestrian Vortex. There are echoes of Lucio Fulci in its florid tale of witches, torture and vengeance.

Strickland focuses on the distant tactile pleasures of celluloid and Steenbecks, magnetic tape and reel-to-reel recorders as Gilderoy works his magic on creating the soundtrack for demanding director Santini (Antonio Mancino). Watermelons, cabbages and a vast array of vegetables are used to create the sounds of squelching and stabbing demanded by a film that we are never permitted to see.

Like a paranoid outsider in a Polanski classic, Gilderoy is also very much at sea in his Italian sound studio. There seems little chance of payment for his efforts and he is constantly thwarted by bureaucracy and indolence any time he tries to assert his authority. Is it any wonder that his dedicated professionalism tips over into obsession, as he takes comfort in letters from his mother and visions of England’s green and pleasant lands and we are left to conclude that he is totally adrift from his moorings.

Often very funny in its first half hour, Berberian Sound Studio never seems entirely clear whether its principal focus is on satirising Italian filmmaking of the period or developing a creepy, unsettling horror yarn. It is too odd, detached and ambiguous to be considered a scary movie and gradually loses its hold as the story unfolds even if Toby Jones shy, bewildered Gilderoy remains an engaging figure.