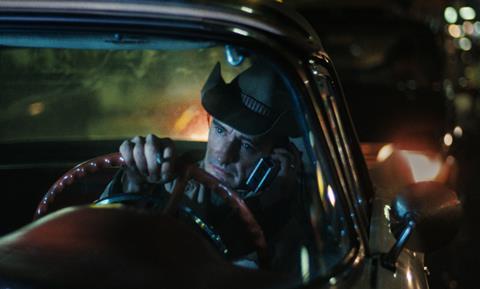 The Berlin International Film Festival (Feb 5-15) has revealed the ten titles that will make up its Homage to German filmmaker Wim Wenders.

As previously announced, Wenders will also be awarded an Honorary Golden Bear for lifetime achievement at the 65th Berlinale.

The award ceremony on Feb 12 in the Berlinale Palast will include a new digitally restored screening of The American Friend, Wenders’ 1977 thriller based on a book by Patricia Highsmith, which tells the story of a fatal friendship between two men, played by Bruno Ganz and Dennis Hopper.

“The American Friend was Wim Wenders’ international breakthrough film. And we were so impressed by the brilliance of the recently completed digital restoration that we decided to premiere it as part of the award ceremony for the Honorary Golden Bear,” said festival director Dieter Kosslick.

Wenders’ early work The Goalie’s Anxiety at the Penalty Kick is considered a milestone of New German Cinema. The 1972 film will be screened in Berlin with a newly remixed soundtrack.

It is one of seven films that will be shown in digitally restored versions in the Homage section of the festival. The restoration work was commissioned by the Wim Wenders Stiftung. A Foundation, set up two years ago in Düsseldorf.

In addition, the Deutsche Kinemathek has teamed up with Berlinale Talents for a special event entitled “Wings of Time: A Conversation with Wim Wenders” the evening before the honorary award gala. At the HAU Hebbel am Ufer (HAU1) theatre, the director will sit down for a discussion in English with Rainer Rother, artistic director of the Deutsche Kinemathek – Museum für Film und Fernsehen.

New York’s Museum of Modern Art will honour Wenders next March with a comprehensive retrospective that will include many of the films shown in this yearʼs Homage programme.

In another nod to the Homage and the honorary award, the ZDF broadcasting group has scheduled a Wenders retrospective for 2015, with the first series of films airing in February on ZDF, as well as on 3sat and ARTE.

Films in the Homage