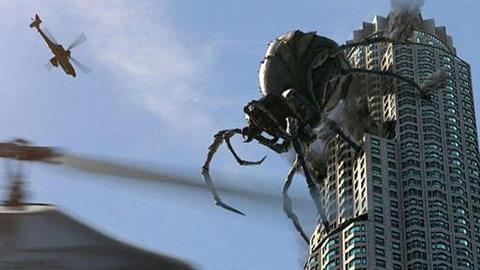 Big Ass Spider is a film that revels in its B-movie status, creating a near apocalypse from the invasion of a giant alien spider. It is a low-budget production, but genre fans should still adore this anarchic monster movie which exploded onto screens at SXSW, where it premiered at a midnight screening to hundreds of cheering fans.

The over-the-top action, where the creature hangs off the side of a high-rise building a la King Kong, and the cliché ridden dialogue are there to be appreciated.

The premise is simple; an alien spider escapes a military lab and rampages the city of Los Angeles. Every time it kills it quadruples in size, so in 24 hours it has grown to the size of several double decker buses and laid eggs. The military try to control the situation with guns and fighter jets, but ultimately the only man that can kill the creature is a clever exterminator along with his trusty Mexican sidekick.

Directed by Mike Mendez, of the unforgettable Midgets Vs. Mascots and scripted by Gregory Gieras, who made his name writing and directing natural-horror comedy Centipede!, the pair are well versed in making B-movie, straight to dvd fodder. The same future could be said of Big Ass Spider, though its enthusiastic response could hint at theatrical options.

In many ways, the film hits all the right notes with its comedy to gross-out horror balance, and could easily become a cult classic, like Tremors or Eight Legged Freaks. Although its not heading into any new territory for the genre, Big Ass Spider is self-conscious enough to appeal to its audience. The over-the-top action, where the creature hangs off the side of a high-rise building a la King Kong, and the cliché ridden dialogue are there to be appreciated.

Greg Grunberg, known for his work on Lost and Heroes, plays the exterminator as the perfect American everyman; a slightly overweight blue collar worker who’s out of luck with the ladies and is just trying to make an honest living. Grunberg’s performance, and that of his sidekick, a security guard called Jose (Lombardo Boyar), are central to the success of the film. There’s even a cameo from Troma boss Lloyd Kaufman as a ‘jogger’ to help emphasise the film’s playful B-movie credentials.

Big Ass Spider (which had the working title of Mega Spider) is essentially exactly what it says on the tin, and should easily find a fan base at midnight screenings next to Boa Vs. Python and the like. Making a final joke about a giant cockroach, the film sets itself up for a range of sequels, but whether they come to anything will depend on the success of Big Ass Spider itself.