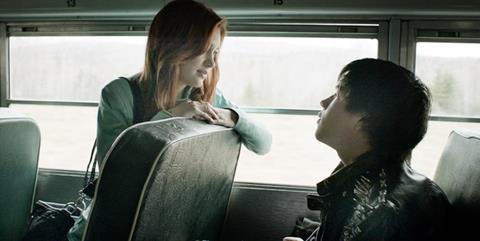 A misunderstood teenage boy falls victim to an uncaring, fearful world, an insensitive father and an inflexible justice system in the well-intentioned coming of age drama Blackbird. Writer/director Jason Buxton appears to have bitten off more than he can handle with an earnest tale that is heavily clichéd and predictable as it rehashes elements of We Need To Talk About Kevin before veering into a mild-mannered re-run of Scum.

There is potential in the story of a teenager’s life being destroyed by a series of naive choices and false interpretations of events but Blackbird generally fails to develop its ideas with any complexity or conviction.

There is some glimmer of interest in a final third that grows markedly more involving which suggests that Buxton could be capable of creating a more polished and arresting drama in the future.

Connor Jessup’s Sean Randall is an overly familiar smalltown misfit who dresses as a goth, despises the blandness of the popular kids at school and feels that his dad Ricky (Michael Buie) just doesn’t understand him.

Hardly surprising when Ricky’s idea of male bonding is to shoot deer together whilst Sean would rather be reading Kafka. Ricky is also prone to wisecracks like” It would be nice if you didn’t dress like every day was Halloween”. When the cops come knocking at Sean’s door, they discover a cache of weapons and computers containing puerile revenge fantasies that are taken at face value.

There is something vaguely interesting in the notion of a post-Columbine paranoia infecting a small community, but we really gain no sense of the Eastport community from the film and it beggars belief that such flimsy circumstantial evidence lands Sean in a juvenile prison.

That’s when the Scum comparisons come to mind as he becomes the target of abuse by tough guy teenagers who bear scant resemblance to real people and seem more like acting class exercises.

There is potential in the story of a teenager’s life being destroyed by a series of naive choices and false interpretations of events but Blackbird generally fails to develop its ideas with any complexity or conviction.

Situations don’t ring true, dialogue fails to crackle and characters are mostly two-dimensional from the mother who has abandoned Sean for a new life to the pretty princess Deanna (Alexia Fast) who becomes the object of Sean’s infatuation.

Maybe it needs someone with the talent of a Ken Loach or a Karl Marcovics to fully develop these ideas into something that has an emotional truth at its core and a keenly observed sense of the real world in its fabric. None of these qualities are evident in Blackbird which often feels more like a made for television production with performances to match. The drab visuals and rain-sodden smalltown setting only confirm the unremarkable nature of the film.