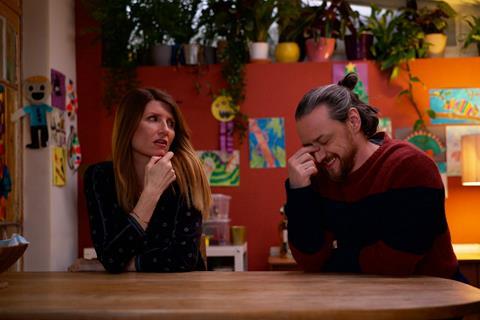 Dennis Kelly wrote the BBC Film presentation of a Shoebox Films and Sonia Friedman production about two partners forced to re-evaluate themselves and their relationship during lockdown.

“Stephen Daldry has brought together two of the most engaging performers to bring to life the story of a family going through what we all went through over the last year,” said Bleecker Street CEO Andrew Karpen.

“The biting comedy, the never-ending uncertainty and the intense frustration of being stuck in quarantine are at the heart of Daldry’s finely attuned film about the complexity and importance of human connections.”

“Dennis Kelly’s urgent and universal story is so timely we want to get it to North American audiences as wide as possible and as quickly as possible,” said Heeley and Friedman. “We’re thrilled to be partnering with our friends at Bleecker Street in rolling out this emotionally charged film this summer and spotlighting James and Sharon’s hysterically funny and poignant performances and Stephen’s pin sharp direction.”

Kent Sanderson and Avy Eschenasy of Bleecker Street brokered the deal with Endeavor Content on behalf of the filmmakers.