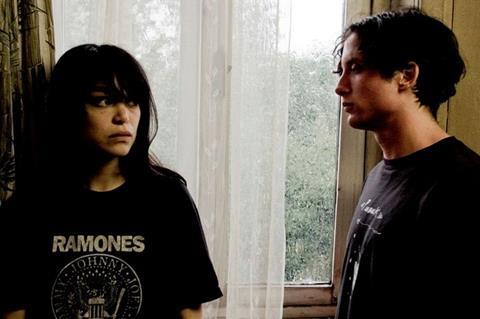 The stories we make up to make relationships work and the stories that are made up in books intertwine touchingly and amusingly, though also a little inconclusively, in Chilean filmmaker Cristian Jimenez’ follow up to the quirky Optical Illusions. Jimenez is one of the most promising current purveyors of the sort of droll existential Latin American comedy that runs through the films of Pablo Stoll and the late Juan Pablo Rebella, or the Daniel Burman of Every Stewardess Goes to Heaven, and his latest film manages to hang a wistful little story of a love lost (and another of a love unrecognised) on its fragile comic peg.

This is a film that very nearly gets away with its tonal shifts between arch comedy and affecting melodrama through sheer force of charm.

The film’s main weak point is its main character, Julio (Noguera), whose deadpan passiveness grates as much as it entertains. Its strength is the way it nails something about the simultaneous lightness and gravity of first love, and also its ability to spin the story out of a metaliterary game without this seeming pretentious. Though it’s not a perfect film it does have a certain lightness and grace - coming on like an upbeat Chilean Norwegian Wood - and could turn out to be an oddly successful investment for those difficult-to-fill arthouse rom-com slots.

Based on a novella by Chilean poet Alejandro Zambra which became a surprise bestseller back home, the film tells two stories which alternate throughout the film. The first centres on the university romance between Julio and Emilia (Galgani), he a borderline-geek who lies about having read Proust (though it’s typical of him that he’s so concerned by the lie that he immediately gets all seven volumes of A la recherce… out of the library), she a pretty punkette.

They meet at a party and are soon making out - with a sweaty, sexy realism that is one of the film’s selling points. When Emilia moves in with her best friend Barbara (Arancibia), Julio takes up residence in her room, and the two read books - Flaubert, Raymond Carver, and of course Proust - in bed, between sleep and lovemaking.

The second story takes place eight years later. Now a jobbing editor and literary assistant, Julio is asked by veteran novelist Gazmuri (Medina) to type out his latest novel for him. Julio pretends to his next-door-neighbour and occasional lover Blanca (Gonzalez) that he is working on the novel with Gazmuri - then, when the novelist pulls out of the deal because Julio’s typing rates are too high, decides that he will go ahead and write the novel that he has been improvising to Blanca anyway.

The story he comes up with is about the relationship that he had with Emilia - which gives us an excuse to dip back into that earlier (and it must be said a tad more compelling) timeframe. By the end we’ve spent three chunks of time with Julio and Emilia in the past, and three with Julio and Blanca in the present.

The bonsai of the title is one of the ideas Julio pulls out of the novel-writing hat which soon becomes a part of his life: he buys himself a miniature tree and learns to train it (could this be the reference to the stunted growth of his two relationships?) Shot with a rich palette and sets that emphasise the creative mess of student and post-student life, and scored with an  eclectic soundtrack that mixes Chilean indie rock with Bach’s Cello Suites, this is a film that very nearly gets away with its tonal shifts between arch comedy and affecting melodrama through sheer force of charm. Nearly, but not quite.