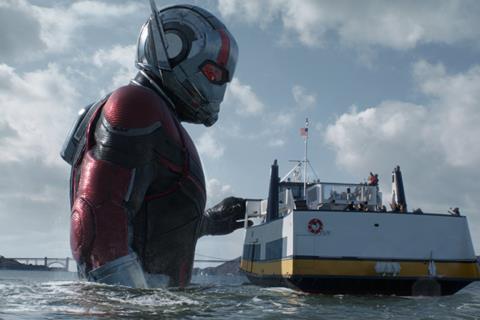 JULY 9 UPDATE: Ant-Man And The Wasp starring Paul Rudd and Evangeline Lilly flew to the top of the North American charts on a confirmed $75.8m as Incredibles 2 crossed $500m, and Annapurna Pictures scored a strong debut with Sorry To Bother You.

Marvel Studio’s 20th Marvel Cinematic Universe release arrived in 4,206 theatres and scored the company’s 20th consecutive number one debut, some 33% ahead of the $57.2m debut of Ant-Man, dropping to 26% when the 2015 original’s launch is adjusted for inflation to $60.3m. That film went on to amass $180.2m in North America.

Michael Peña, Michael Douglas, Michelle Pfeiffer, and Laurence Fishburne round out the key cast in the sequel, and Peyton Reed returns as director.

Blumhouse’s The First Purge scored the lowest three-day debut of the five-year horror series on $17.4m for number four via Universal, rising to $31.3m over five.

Drug cartel thriller Sicario: Day Of The Soldado starring Benico del Toro and Josh Brolin slipped 59.9% and two to number five in its second weekend as $7.6m boosted the tally to $35.6m.