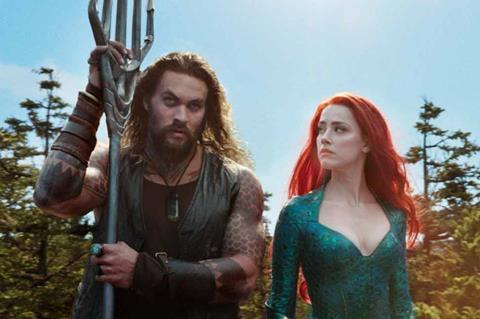 UPDATED: Aquaman remained in spectacular form in its second international weekend as a confirmed $131.3m from 43 markets propelled the early running total to a muscular $266.4m.

A further $25m enabled Universal’s The Grinch to take another giant stride towards the $150m mark, while Ralph Breaks The Internet stands at $130.7m from approximately half its markets.

Now on $266.4m after two weekends, Aquaman surged into 43 new markets and added $54m in its second weekend in China where it has amassed $189.2m to rank as the second highest grossing Warner Bros release in history and already stands as the fourth highest grossing superhero adaptation.

Besides China, the DC Entertainment tentpole was in magnificent form around the world. Opening number one in all its markets, it debuted in Brazil on $8m for 82% market share of the top five, Russia on $7.8m for 49%, Mexico on $8m for 63%, the UK on $6.7m for 46% share, and Indonesia on $7.1m for 87% share and the second highest Warner Bros debut in history, and the highest DC Universe debut behind Batman v Superman.

Elsewhere, Jason Momoa, Amber Heard, WIllem Dafoe, Patrick Wilson and the cast arrived in Taiwan on $4.9m for a record Warner Bros opening weekend. The Philippines generated $4.4m for a new record for director James Wan, India produced $4.2m for the second highest Warner Bros debut in 2018, and a new mark for a December release, and Thailand $3.6m and 94% market share for a new Warner Bros debut record.

This week brings debuts in France, South Korea, Germany, Spain, and North America. The final key markets are Australia on December 26, Italy on January 1, and Japan on February 8.

Spider-Man: Into The Spider-Verse began its international rollout by complementing the number one North American launch with a $21m haul from 44 markets led by South Korea on $3.3m, the UK on $2.9m including previews, Russia on $2.3m, and Australia on $2.3m including previews. There are 11 new markets this week including China and Spain.

Searching added $2.7m in China as the international running total climbed to $47.6m. The Possession Of Hannah Grace grossed $2m from 34 markets and stands at $15.6m.

Bohemian Rhapsody stands at $456m following a $20.5m weekend in 65 markets. The Freddie Mercury drama remains number one in its seventh weekend in South Korea, where after a 10% drop it added $5m for $61.1m. It ranks second in Japan where $3.8m boosted the tally to $47.4m after six weekends, and top in its third weekend in Italy where $2.8m raised the running total to $17.7m.

Dragon Ball Super: Broly launched at number one in Japan where the animation grossed $9.2m. Upcoming releases are set for Malaysia, Singapore, and Thailand on December 27, and the balance of Latin America opens in early January.

Ralph Breaks The Internet brought in a further $7.9m from 32 material territories representing toughly 54% of the market to push the running total to $130.7m. The family film debuted in the Netherlands on $500,000 and in Belgium on $300,000.